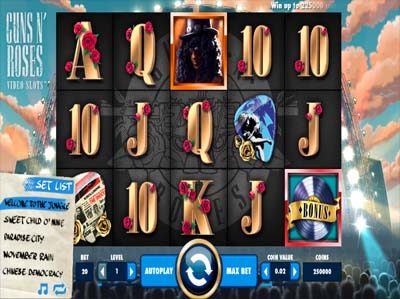 We all know who Guns N’ Roses are, right? Well, if not, this game will surely be able to fill you in the most loved rock bands in history. In this one, you’re given the choice of five different songs to accompany your game play, with options such as ‘Paradise City’ and ‘November Rain’ on offer. The reels feature various different icons, starting with rose-adorned A, J, K, Q and 10 symbols. There’s also two guitar plectrums, and three of the band have made it into the game as icons.

As far as the interface of this one is concerned, it’s played on a five reel and three row display, and Netent have also made sure to include a total of 20 different pay lines. You cannot adjust these in any way, but you do have the ability to change around your wager placed per spin. The coin value can be altered between £0.01 and £1, while the bet level is able to be altered between one and 10. This allows all players the possibility of placing a maximum overall wager of £200 per round.

This game doesn’t lack specialities in any way, and the first of these is its wild symbol. This is the Guns N’ Roses logo, and these can appear anywhere at random on the reels, except from the middle reel. This will substitute for any other symbol on the reels, except the bonus icons.

The bonus icon is represented by the vinyl record disc, and three of these appearing anywhere on reels one, three and five will randomly award one of three different features. These are the ‘Encore Freespins’, the ‘Crowd-Pleaser Bonus Game’ or a coin win. The first of these provides you with 10 freespins, and during this round, a symbol of a band member will appear as an overlay wild on reels two, three or four. The bonus game is a pick and click round with three levels. These award coin wins or freespin symbols.

Something called the ‘Appetite for Destruction Wild’ is also included in the game, and this is wild in the form of a cross. There’s also the ‘Legend Spins’, and this special feature is randomly activated, awarding a stacked wild for the first spin and two stacked wilds for a second re-spin. Finally, there’s a ‘Solo Multiplier’, and this is a multiplier that awards a win which gets multiplied between four times and ten times.