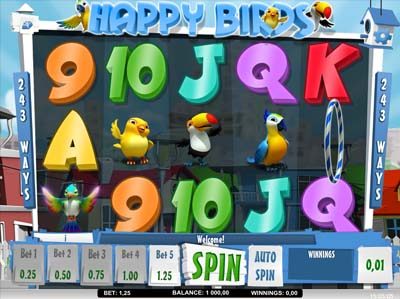 So, the world went crazy for the Angry Birds phenomenon, but if you’re in the mood for something a little bit more bright and sparkling, why not try the Happy Birds slot from iSoftBet. In this one, you’ll be taken to a cosy little town, where birds apparently enjoy spending their time. The reels of the game are filled with various different icons, starting with the regularly used A, J, K, Q, 10 and 9 symbols, and these are joined by a few different birds, including a toucan and what appears to be a bird of paradise. The graphics incorporated into the game are of the highest quality as well, so you’ll be provided with a visually appealing game overall.

Everything is presented up on a five reel and three row interface, so it should be a fairly familiar overall layout to game on. The developer has also included a total of 243 different ways to win, and while this cannot be altered in any way, the amount that you wager per spin is able to be changed. You will see five different bet amounts displayed across the bottom, providing options between £2.50 and up to £12.50 per round.

The aforementioned bird of paradise offers up this game’s wild symbol, and this will stand in for any other, with the exception of bonus icons and magic hoops, in order to form a winning combination. However, this isn’t the only speciality incorporated into the game.

The bonus symbol, which is represented by the word ‘BIRDS’, will activate the game’s bonus round if at lest three of them appear on the reels. This presents you with several different hot air balloons, and you need to shoot them down to win prizes, such as coin wins and multipliers.

Finally, the magic hoop symbol is what will trigger the freespins round, and you’ll need to spin one onto reel two and another onto reel four to activate it. A random number of freespins will be awarded to you, and during this round, wild symbols will also be awarded to you at random.

Happy Birds is certainly one of those games that you begin playing and then become so engrossed with the graphics and overall design that you simply cannot stop…in the best possible way, of course.