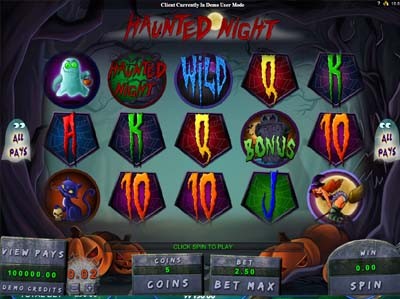 Ghosts and ghouls and monsters, oh my!

That’s exactly what you’ll get when you play Gensis Gaming’s, Haunted Night. Its reels are filled with all sorts of haunting creatures, from witches to ghosts, and black cats to carved pumpkins, this is surely one to play at Halloween. The game appears to take place in a scary, dark forest, where the shadows of creepy figures can be seen walking by randomly. There’s also a wonderfully scary soundtrack included, which plays every time you take a spin of the reels.

A total of five reels and three rows make up the interface for this game, while Genesis have also included a total of 243 different ways to win alongside. All players are able to change the included coin value from its minimum of £0.01 up to its maximum of £0.50, while the amount of coins used is changeable from one through to five. This provides gamers with an opportunity to place a maximum wager of £62.50 per spin.

There’s a wild symbol included in the game, which will act as a substitute for all other symbols on the reels in order to form a win. The only exceptions to this are the two scatter icons. Wilds will appear only on reels two, three and four.

The first scatter symbol is represented by the icon with the words, ‘Haunted Night’ written across it. This triggers the ‘Haunted Freespin’ feature. Here, you need to choose between three sets of freespins. The choices are:

Three of the second scatter icons appearing anywhere on the reels, represented by the tombstone will activate the ‘Gravestone Pick’ feature. The player will need to select gravestones from a choice of 15, which will reveal either a coin value or the word ‘Collect’. Should the latter appear, the round ends.

This product offers up a nice little gem of a game that gives players the entertainment factor and merges it with stellar special rounds and intriguing game play.