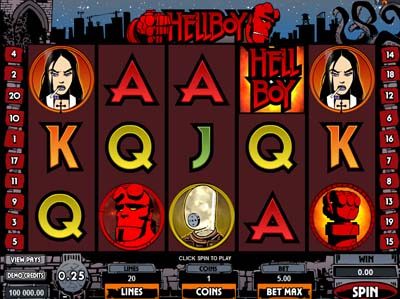 Do you enjoy the famous Hellboy cartoon? Did you perhaps see the movie version and sit through every last minute of it before leaving the cinema and wanting more? If so, you’re in luck, because Microgaming has crafted together a game based on the characters from the show, meaning that you can live the Hellboy life a little longer. The reels feature various different people from the cartoon, including the title character himself, of course. There’s also a wonderful piece of music incorporated to accompany you on your spinning frenzy.

A total of five reels have been included in the game, while three rows make up the rest of the layout. There’s also 20 customisable pay lines alongside, and the coin value in the game is able to be altered between the minimum of £0.01 and the maximum of £0.25 per active line. In addition, players can change around the amount of coins they choose to wager with, offering up a maximum of 10 per spin. Therefore, you’ll be able to take advantage of a maximum overall bet value of £50.

Should you manage to spin three, four or five scattered red fist symbols, ‘The Underworld Bonus’ round will trigger. Your mission in this round is to secure and locate the hidden relic of power, which is guarded by so-called ferocious beasts.

There’s also a randomly triggered feature, called ‘Supermode’. This can decide to award you with 10 freespins of the reels, and during this round, up to three wild positions are randomly awarded and held in place for the duration.

Finally, the game’s logo will act as the wild symbol, substituting for other icons on the reels in order to craft a win, with the exception of scatters.

This game will appeal to both fans of Hellboy and those who just enjoy video slots. It’s well designed and has interesting bonus features that keep you coming back for more!