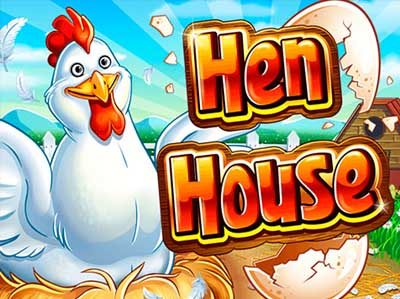 Head over to the country side for an all-natural, down-to-earth gaming experience. If you have ever thought of just leaving it all behind and going to live on a farm, this title will give you a glimpse of what that might be like. Hen House is an online slot game with a distinct country theme and it is brought to you by casino software developer RTG. The backdrop here depicts the vast green plains of the countryside. The horizon is lined with trees, and beyond them you can see the outlines of tall mountains. It’s a sunny summer day, the sky is clear and blue – it’s all just a beautiful setting. And just above the reels you can see a little bit of the white picket fence to remind you about the farm aspect of this game. There’s also a very appropriate soundtrack to accompany gameplay. 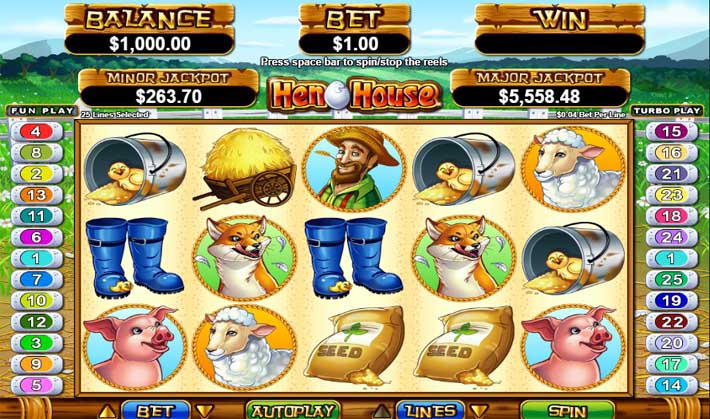 The symbols here will enhance the farm vibe even further. And they start off with the lower value symbols depicting a bag of seeds, a pair of high rubber boots and a bucket with a little chick peering out from it. Next is another batch of three symbols, slightly higher in value than the previous three. These depict a large stack of hay in a wagon, a pig and a sheep. Next in line is the symbol of the fox that’s licking its lips in preparation for a juicy chicken. And after that we have a symbol picturing a happy farmer in a straw hat. Then there’s the hen house symbol is the highest paying rooster icon. With its help you can pocket up to a whopping 5,000 coins from a winning spin. As far as the layout in this title goes, though, there’s nothing unusual about it. There are 5 reels and 3 rows with a total of 25 paylines. The paylines are flexible, so you can regulate them as you see fit. And this will also affect the betting range, where the minimum bet is only 1c per spin. The maximum bet per spin is $6.25.

One of the special symbols you will really want to watch out for in this game is the Hen icons. It can only appear on the middle three reels 2, 3 and 4, though. And it doesn’t offer any impressive payouts of its own. However, it represents the game’s Wild and as such it will be able to replace any of the other symbols on these reels. And when it does contribute to winning combinations, you will see the hen fly up a little to reveal an egg it laid. Note also that there is just one symbol the Wild won’t be able to substitute for and that is the game’s Scatter.

Ironically, the Scatter comes in the shape of an egg, and a pretty large one at that. Unlike the Wild symbol, though, it will be able to appear in any position, on any of the five reels. But its main attraction is that it will be able to trigger the Henhouse Pick feature. For this to happen, however, you will be looking to land a minimum of 3 Scatter symbols all at the same time. As a result of this, you will enter an actual hen house with 9 different hens before you. 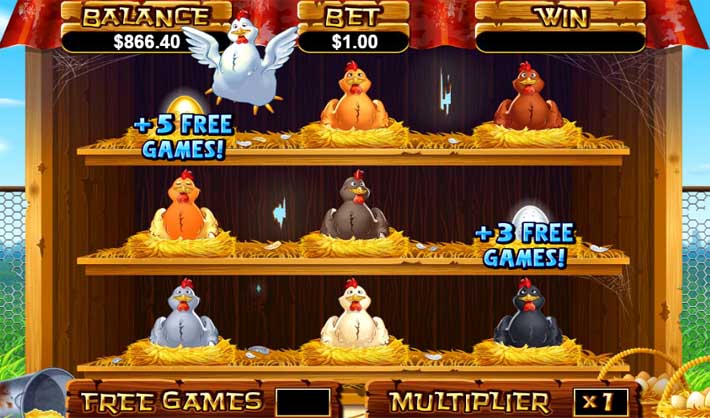 In the second round, revealing a white egg will increase the multiplier by 1 and award you another pick. In turn, a golden egg will increase the multiplier by 2 and trigger the 3rd round. Finally, in the third round you will be looking to reveal a bonus symbol, which will act as a second Wild in the freespins feature. Revealing a rotten egg in any of the rounds will end the pick-me game and start the freespins round. You can also retrigger the feature and receive an extra 5 freespins on top of those you have left.

Hen House is a really fun slot game with an interactive feature and great visuals to support it. However, it’s a volatile offering and reaching that feature won’t be very easy. So, stock up on patience and keep an eye on your bankroll as you enter this title. But once you actually do get to the freespins, they can prove to be very rewarding.