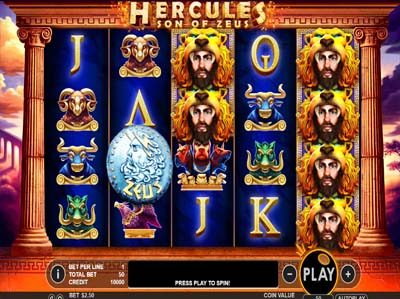 Hercules Son of Zeus is a visually pleasing slot game by software developer Pragmatic Play. The first thing that players are bound to notice is the quality of the graphics. The backdrop features a very heavenly scene, worthy of the title and contributing to the air of ancient gods and titans. The reels actually showcase iconic symbols we’ve all read about in Ancient Greek myths. For example, the three-headed dog Cerberus is a very notable personage. The infamous and fearsome Minotaur is also present. Zeus’ personal messenger, the giant golden eagle is on the reels, too, as is a depiction of Zeus himself. Finally, Hercules and the golden-fleeced ram are also in this game. In addition to them, you will also see Greek-styled playing card symbols: A, K, Q and J.

As for the layout, it features 5 reels and 4 rows. There are 50 fixed paylines and betting amounts range from 50p up to £250 per spin. Hercules Son of Zeus is a medium volatility slot game with a RTP of 94%.

Hercules, the game’s namesake, is also this slot’s Wild symbol, in addition to its highest paying one. In fact, if you land 5 of a kind on a payline, you can score 800 coins! Alternatively, if Hercules appears as a stacked Wild, you will receive a whopping 800 times your stake. It can replace any of the lesser paying symbols to help create winning combinations. However, as is custom, a son cannot replace a father and a Wild cannot substitute for a Scatter. And the Scatter symbols in this slot game is the king of gods himself – Zeus. You will want to look out for him, as he only appears on reels 2, 3 and 4.

If you can land all three Zeus symbols on the reels at the same time, you will trigger the Freespins feature. As a result, you will receive 6 freespins on a new set of reels. In addition to that, you will also receive payouts of double the total amount of your stake. But let’s get back to the freespins. The number doesn’t seem like much, but it offers extras. For example, before each spin, a Wild will be added to the reels 2, 3 and 4. They will remain as sticky wilds on the reels throughout the duration of the freespins features. And in addition to that, you also have the chance of gaining extra freespins. To do that you will need to land Scatter symbols during the feature and you can end up with a total of 9 freespins.

Hercules Son of Zeus offers some very impressive graphics, despite them not boasting crazy animated features or anything of the sort. The game has a very  low theoretical RTP, and the scarcity of bonus features is, unfortunately, a bit underwhelming.