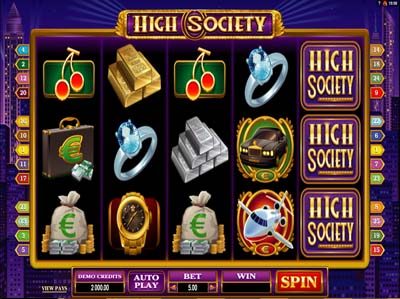 We’ve often wondered what it would be like to live the high life, and High Society from Microgaming gives you a brief look into what that kind of world would be like. As such, you’ll find that there are various different symbols included in the game, starting with three trinkets – the cherry-shaped broach, the golden wrist watch and the sapphire-stoned ring. Another five symbols are presented in the form of a money bag complete with golden coins, a stack of silver ingots and a briefcase filled with money. The other two are represented by a stack of gold ingots and a flashy black car. The two highest paying symbols are presented in the form of a luxury yacht and a high class aeroplane.

A total of five reels and three rows are included in this game, and these are joined by a total of 25 different pay lines. These can be customised simply by pressing on one of the numbers down either side of the reels, and you’re also able to change the amount of the bet you place per spin. The coin size is able to be altered between £0.01 and £0.50, while the amount of coins wagered per line can be adjusted between one and 20. This allows a maximum overall wager of £250 to be played per spin.

The High Society game logo is what represents the game’s wild symbol. As a wild it will stand in for any other icon on the reels in order to form a winning combination, with the only exception being the scatter. In the base game, the wild only appears on reels one and five.

When it comes to the scatter symbol, this is represented by the wad of money clasped together. You’ll need to spin three or more of these on to the reels in order to trigger the freespins round, and this features a bonus choice addition. These bonus choice additions come in the form of either the Super Wild Reels or Super Multiplier.

The first of the bonus choices will give you either 10, 15 or 20 freespins, depending upon the amount of scatters that triggered the round. Up to three wild reels will be triggered at the start of every freespin. A scatter on reel one or reel five will turn the entire reel wild. The second of the choices gives you 10 freespins and at the start of every freespin, the multiplier of the game will increase up to times 10 every time a scatter shows up on reel one or five.

If you’d like to be a member of the high society, then play this game and take advantage of its wonderful special features.