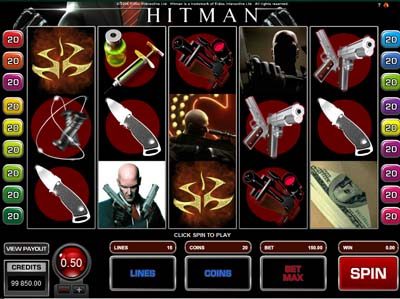 Based on the popular video game, the slot version produced by Microgaming puts Hitman front and centre of your screen once more. Of course, fans of the original product will no doubt be intrigued by what’s on offer in this one, and it’s true to say that it represents the game quite well. The reels are filled with a variety of different icons, including tactical weapons like knives, pistols, and syringes filled with poison. In addition, you’ll have a great piece of music accompanying you as you play.

There are five reels and three rows included in the game, while a total of 15 pay lines have been added as well. The lines can be adjusted to suit your own personal preferences, while the in-game coin value can also be changed, moving from its minimum of £0.01 up to its maximum of £0.25 per active line. The total coins wagered per round can also be altered, moving from one to 20. A ‘Bet Max’ button has also been included to allow you to place the maximum bet in a single click.

The Hitman himself acts as the game’s wild icon, substituting for all others in order to create a winning combination, except the bonus or scatter icons. He will appear on reels two, three and four only.

A total of 18 freespins will be triggered should you spin three or more scatter icons – represented by the symbol with the number 18 on it. As an extra bonus during this round, all freespin wins are doubled.

The product also includes two bonus game rounds. The first is the ‘Contract’ game, which is triggered by the laptop icon landing on line three, four or five. This round requires you to pick a weapon and a target to murder. Based on the hit and the weapon used, you can win up to 270,000 coins from this round. The second one is the ‘Insignia’ round, with the insignia symbol activating this should it land on reels one, two and three. You simply need to select an icon and pick up the bonus amount from it.

Hitman, as a game based on another game, presents players with a great product to play whilst simultaneously offering up intriguing extras and bonus rounds.