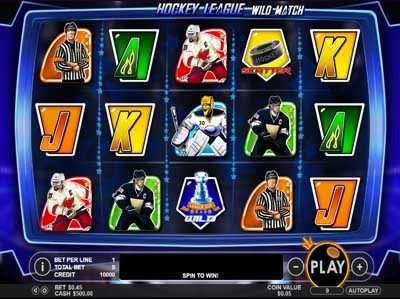 Hockey League Wild Match is a slot game by software provider Pragmatic Play. Hockey fans, this game is certainly for you. Everything from the symbols, to the backdrop and especially the sound effects will work towards transporting you to the ice hockey arena. You will get to hear the cheering of the audience, as well as some of the action taking place on the invisible rink. The symbols showcase all the most characteristic parts of the game, most importantly the players. A referee is also present, as are a hockey puck and a league cup. You will also find the lower value playing card symbols, styled to match the theme. A peculiar feature in this game is the way the reels stop spinning. Contrary to most slot games, here, they don’t stop spinning in chronological order. Instead they alternate, stopping first on the sides and making their way towards the middle.

The game provides a rather traditional layout of 5 reels and 3 rows. There are 9 paylines in total and you won’t be able to adjust those. However, feel free to play around with the ‘+’ and ‘-‘ to change the bet per line and coin value. Players can enjoy a betting range starting from 9p per spin and up to £45 per spin.

The Wild symbol in this game is also its highest paying one with maximum payouts reaching up to 5,000 coins. It comes in the shape of a trophy. What’s more, it can replace any of the lesser value symbols to help form winning combos. In addition, the Wild can appear fully stacked on the middle reels 2, 3 and 4. What it can’t do is replace the Scatter symbol, though.

It, in turn, comes in the shape of a hockey puck and is responsible for activating the game’s freespins feature. The Scatter can appear on any position, anywhere on the reels. In order to trigger the freespins, you will be looking to land at least 3 Scatters at the same time. Depending on the number of Scatters you land, your freespins number will vary. 3 Scatters will give you 10 freespins, 4 will grant you 15 freespins and 5 will reward you the maximum 25 freespins. But that’s not all this symbol has to offer. What’s more, it will also provide you with a multiplier on your total stake. This number, too, will depend on the number of Scatter symbols you landed. Three, four and five hockey pucks will award you 2, 5 and 20 times your stake, respectively. Moreover, all winnings from the freespins will be subject to a 3x multiplier!

Both the design and gameplay of Hockey League Wild Match are fairly simple and straightforward. Nevertheless, they offer a decent amount of action, even in the base game, mainly thanks to the Stacked Wilds feature. In addition, despite there only being one bonus feature, it can still make for some nice wins.