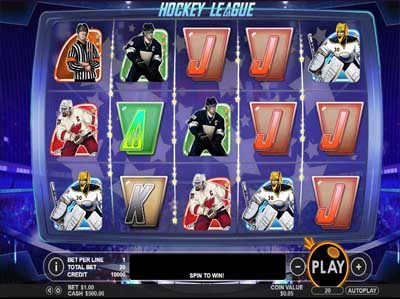 Hockey League is yet another sports-themed slot game by developer Pragmatic Play. It features the bustling ice hockey rink, with all the sounds and noises you can expect to hear on one. You will hear fans cheering on their favorite teams, shouting and the sounds of sticks hitting the puck. In addition, the reels also showcase two players from opposing team, as well as a goalie of one of the teams and a referee. The other icons on the reels are the lower value playing card symbols. Each is styled to match the theme and they range from A through K, Q, J and 10. In addition, the special symbols include a hockey puck and a trophy.

The layout is a traditional 5 reels and 3 rows, with a total of 20 paylines. You can select your desired coin value and bet per line with the help of the + and – buttons. Thus, you can set the minimum stake to be at 20p per spin and work your way up from there to reach the maximum of £10 per spin. The  RTP is set at 94.11%, a bit too low for our liking.

The trophy we mentioned earlier is the Wild symbol in the Hockey League slot. It is also the highest paying symbols, offering payouts of up to 1,000 coins for landing five on a payline. In addition, it can also replace any of the lower value symbols to contribute to forming winning sequences. What’s more, it can also substitute for the hockey puck symbol, which happens to be game’s second Wild and Scatter. As such, the hockey puck can also replace any of the other symbols in the game, in addition to activating the special feature.

All of the fun in this game centers on its Most Valuable Player bonus round. To activate it, you will be looking to land at least 3 of the game’s Scatter symbols. It will reward you with 10 freespins. However, before they start, the game will randomly select one of the character symbols to act as a Scatter during the freespins. Furthermore, it doesn’t need to appear on a payline to offer you payouts. And to make matters even better, you get to retrigger this feature for extra freespins! You will again need to land another 3 or more hockey puck Scatter symbols another 10 freespins. Thus, in total you can gain 20 freespins during the bonus round.

Hockey League isn’t as entertaining a slot as one could imagine, but we should at least give credit for creating a convincing atmosphere. The sound effects are realistic enough to make you feel like you’re really in the arena. There’s only one bonus feature in this game, but it occurs pretty frequently. Thus, we would put this slot in the low to medium variance range.