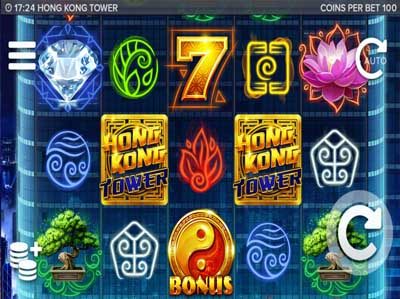 Have you ever thought of how one could possibly spin the overused theme of China and the Far East in a new and unexpected way? Well, software provider Elk Studios has managed to do just that with online slot game Hong Kong Tower. Instead of featuring the regular old scenery or the traditional Chinese ships with their red sales, the developers here have taken an entirely different approach and have aimed for the new, technologically and otherwise advanced Hong Kong. In fact, the backdrop pictures a tall, modern skyscraper and even the soundtrack has a very futuristic theme. As for the symbols here, most of them are quite unusual and include fluorescent representations of flowers in different colors.

As for the layout, things are pretty common here: there are 5 reels and 3 rows. Notice that there is an unusual number of paylines here, though, namely a total of 99 of them. This doesn’t drastically impact the betting range, though. Stakes here start at only 20p per spin and reach up to a maximum of £100 per spin. And as for the RTP, things are pretty fine here and players can expect an average of about 96.3%.

We usually like to start describing the special features in a slot game by first introducing the Wild symbol. This case will have to make the exception, though, because Hong Kong Tower doesn’t really have a Wild symbol. Instead, you will have something called a Mystery symbol, which in a way kind of fulfills the Wild’s duties. It comes in the form of the game’s logo. And every time it lands on the reels, it can assume the shape of any of the other symbols, including the Bonus symbol! That way it can help players land more winning sequences.

As for the Bonus symbol, it pictures a golden representation of the Yin Yang symbol. Actually, there are 2 of them. One is blue and the one the Mystery symbol can transform in, while the other is red. By landing 3 or more of the red Bonus symbols or at least 1 blue one, you will trigger the Wheels of the Sky Bonus feature.

This is the game’s main attraction, where you will enter a new screen. There will be 3 skyscrapers there waiting for you, each with a wheel of fortune on it. When the first one starts spinning it can award you a cash prize, end the feature or boost you to the next wheel. You may have a number of lives, depending on the number of Bonus symbols you landed. This will help you delay ending the feature if you land on a blank spot. As soon as you run out of lives and land a blank spot on any wheel – the bonus game will end.

Hong Kong Tower is a fun, innovative slot game. The graphics are really up to standard and the two different bonus features here certainly bring something fresh to the table.