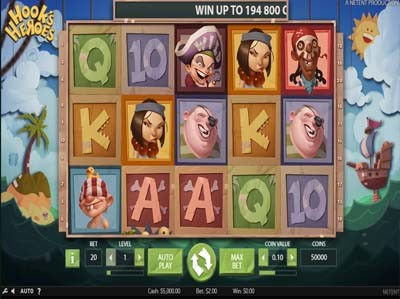 Shhhhhhhhh! The Hook’s Heroes puppet show is about to start! Quieten down!

One of the latest releases from Netent will have you smiling from ear to ear as soon as it starts, providing a wonderful take on the pirate theme, taking it from just a standard game into a puppet production of such. This being the case, the backdrop is filled with various props being held in place by stray hands. Meanwhile, the actual reels have various different pirates included on them as the game’s icons, as well as standard A, J, K, Q and 10 symbols.

There are five reels and three rows which provide this game with its layout, while there’s a total of 20 paylines included alongside. The bet level of the game is able to be changed between the minimum of one up to its maximum of 10. Meanwhile, the coin value starts from as little as £0.01 and can be increased up to £1.00 per line. Should all these be maxed out, players will be able to take advantage of the maximum wager level of £200 per spin.

The pirate dressed in a crocodile costume works as this products feature spins icon. Two or more of these appearing anywhere on the reels will trigger a feature spin with a randomly chosen feature. There are three of these different features available.

The Fairy Feature will see between two and five overlay wilds placed on the reels in random positions. The Mermaid Feature multiplies all wins by two, unless the combination contains one or more wild icons, in which case it is multiplied by four. The Pirate Feature will calculate wins by the number of visible symbols on the reels, instead of the amount that are on bet lines. Therefore, symbols don’t need to appear on consecutive reels in order to provide a pay out.

Should three scatter icons appear on the reels anywhere, the freespins round will be triggered, and the player can choose which of the three features they want to be activated during the round. Each feature provides a different number of freespins, with the fairy providing seven, the mermaid providing 10, and the pirate providing 15.

Finally, the standard wild icon is represented by Hook himself, and this will substitute for other icons on the reels to form a win.

Hook’s Heroes is a great game, providing entertainment and many special features within.