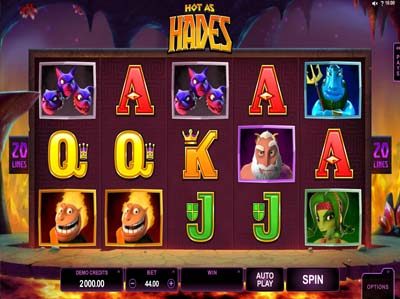 If you’re fully aware of Greek mythology, you’ll know all about Hades. He was the ancient chthonic god of the underworld and the eldest son of Cronus and Rhea. He fought alongside his brothers, Zeus and Poseidon, his father’s Titans were wiped out. This game from Microgaming takes players right down to the heat of the underworld. However, it does it in a cartoon-like way. The reels contain icons in the form of A, J, K, Q and 10 in the first instance. Joining these are five other icons, one of Hades’ dog Cerberus and a second of Medusa. The remaining three are of Poseidon, Zeus and Hades himself.

All players will find that the game’s design features five reels and three rows. Microgaming have also put 20 different pay lines in the game. You do not have the ability to adjust these, but you can change around the bet that you place. The game’s coin size is changeable between £0.01 and £0.20. Meanwhile, the amount of coins that can come into play is alterable between one and 25. Pushing both of these up to their highest levels provides a maximum wager possibility of £100.

As well as the standard features, this game offers up some speciality features as well. The first of these is the wild. The logo of the game provides this addition. As such, it will substitute for all other symbols on the reels, except for the scatter. Furthermore, all wins are multiplied by times two. However, if you spin five wilds onto a winning pay line, a maximum pay out of 10,000 coins can be won.

The game’s scatter symbol is the shining helmet. Scatter wins are multiplied by the total bet you have in play. Again, five scatters pay out a maximum amount of 10,000 coins. The scatter is also the symbol which will trigger the ‘Quest Bonus’. You need to spin three, four or five of the scatters into view in order to activate this round. Your quest is to reclaim the crystal helm, which is guarded by Poseidon and Zeus. Finding Cerberus during this round will award all prizes for that level.

There’s also the ‘Super Mode’ in this game, which randomly comes into play. This awards a total of five freespins. During this feature, three wild positions also become active on each spin.

What do you get when you merge a great theme with stellar graphics and gameplay? Hot as Hades, of course! Microgaming certainly provide a wonderful overall game with special features to impress all players.