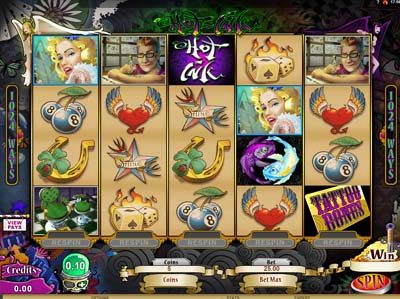 Taking you on a trip to your local tattoo parlour, Hot Ink certainly offers up an intriguing game. So, if you’re ready to get your next piece of ink, you should definitely check out this Microgaming offering. If you do, you’ll find that there are reels filled with various different icons relating to the theme. The first five symbols are tattoo designs, one of a set of 8 balls and another of a heart with wings. There’s also a star with the word ‘Shine’ written on it. Joining these are some flaming dice and a horseshoe with a four-leaf clover. The higher paying icons exist in the form of the ink parlour and the tattooist’s chair. The artist and his two lovely employees, Luci and Angel, make up the remaining three.

Everything in this game is shown on a five reel and four row layout. This means it’s a little bit larger than the standard slot game. Microgaming have also made the design include 1024 ways to win alongside. These bet lines are set as they are, but players can adjust the wager that they play. This is done first of all by altering the value of a single coin. With this, you can select from between £0.01 and £0.25. Meanwhile, you can change the amount of active coins between one and 10. Therefore, a maximum overall wager of £125 is available.

This game has a few different special features in it, starting with the ‘Mixed Pay’. This occurs whenever Angel and Luci appear in any left to right combination. This ensures that you receive a pay out even though it’s not three or more Angel’s or Luci’s.

The game’s logo is what provides it with its wild icon. As a wild, this substitutes for any other symbol on the reels in order to form a win. The only symbol that is an exception to this rule is the game’s scatter icon. Should five of them appear on the reels, you’ll receive a maximum pay out of 1,000 coins.

The two koi carp provide the scatter symbol of this game. These pay out rewards wherever they show up on the reels. Three, four or five of them coming into view will reward you with 20 freespins. All wins during this round pay out double.

There’s also a ‘Tattoo Bonus’ round in this game. This becomes active when three, four or five bonus icons come into view. You simply need to click each of the albums to reveal a combination of tattoos. Each of these reward a coin pay out to you. If you match three of the same themed tattoos, 10 freespins will be your reward.

Finally, there’s a re-spin feature involved in the game. At the end of each spin in the base game, you have the option of paying to re-spin one or more of the reels.

Hot Ink is certainly a game with a great theme, intriguing specialities and decent graphics alongside.