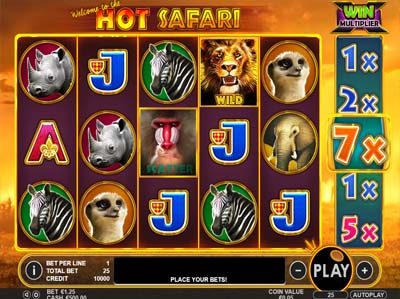 Hot Safari is an African wildlife themed slot game by software developer Pragmatic Play. As the game title suggests, you will be transported to the great savanna and get to meet some of its most iconic inhabitants. The graphics aren’t too sophisticated, but they do offer some entertaining animated features throughout gameplay. One is, for example, the running lion, who appears to be chasing you from within the screen. In addition, there are elephants, rhinos, baboons, meerkats, antelopes and zebras. There are also lower value playing card symbols on the reels, which don’t quite match the theme and range from Ace to 10.

The layout features 5 reels and 3 rows, with an extra reel and a total of 25 paylines. You won’t be able to adjust the number of paylines, but you can regulate the bet per line amount, as well as the coin value. Players can also enjoy a rather flexible betting range from 25p up to £125 per spin. And last but not least, Hot Safari has an RTP of 96.17%.

The highest paying symbol of the game, as well as its Wild is the king of the jungle – the lion. In addition to appearing anywhere on the screen, this Wild is an expanding one. Thus, if it lands in the middle position it can cover the whole reel and make for bigger wins. A special treat in this game is the extra reel you will notice the right of the regular reels. It spins together with the other reels, only instead of symbols it showcases different multipliers. Each winning spin will be subject to the multiplier you land, which greatly increases the prizes you can receive. The multipliers range from 1x to 10x. 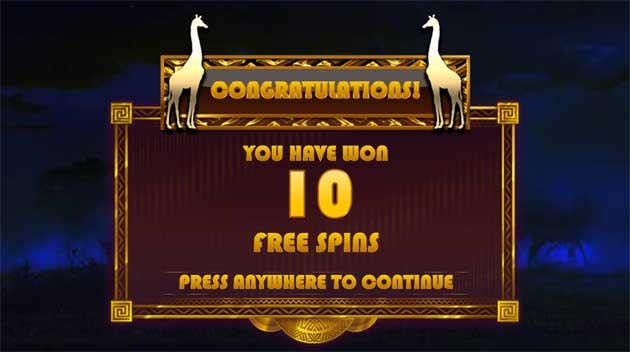 The sixth reel also features a Super Wild, which can activate the Super Wild Bonus feature. It will reward you with a respin and extra Wild for that respin. But this game also has a Scatter symbol. Look out for the baboon, as it can appear anywhere on the reels. Your goal will be to land three of these symbols on the reels in order to trigger the Freespins feature. As a result, you will receive a total of 10 freespins, during which you can also take advantage of the Super Wild Bonus feature. In addition, you can retrigger the bonus and gain a total of 20 freespins. Ideally, you can end up scoring a fantastic maximum payout of 4,000 times your stake.

Hot Safari offers more action than first meets the eye. What it lacks in graphics it surely compensates for with the diversity in special features. The additional sixth reel certainly adds to the excitement and more so to the payouts. What’s more, the freespins feature, coupled with the expanding Wilds also contributes to the lucrativeness of this game. The Super Wild Bonus feature has the best potential in our opinion and we prefer this feature over the free spins feature. All in all, this is a fun game from Pragmatic Play and well worth a spin.