Invaders from the Planet Moolah 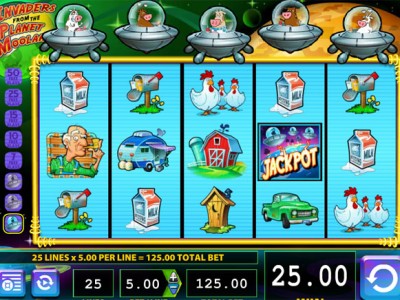 Invaders from the Planet Moolah places all its focus on providing an entertaining game, thanks to its reels filled with chickens, mobile homes, barns, mailboxes and others. Above each of the reels, there’s also five UFOs containing five different cows – which are no doubt the invaders. Meanwhile, the icons on the reels are obviously the items that the invaders are wanting to abduct. There’s also a zany soundtrack playing in the background as you spin the reels. The dog, grandpa, grandma, cowgirl and man symbols all work interactively, allowing you to construct a winning combination from a mixture of any three or more.

You’re provided with five reels and three rows worth of an interface, plus there’s a total of 25 paylines incorporated into gameplay as well. The minimum bet per line begins at £0.01 and maxes out at £5.00 per line. This allows a maximum overall wager to be placed of £125 per spin. An autoplay feature allows you to play 50 consecutive rounds at the same wager.

There’s three separate wild symbols included in the game, each of which features the image of a differently marked cow. This is wild for all symbols and appear on reels two to five, standing in for other symbols to create a winning combination.

After every win, the UFOs perched above the reels will spring into action, abducting random icons from the reels. This will create a cascade of symbols that will fall into the spaces. Further winning combinations will cause further abductions, and this continues, with four or more of these cascades triggering freespins. Four consecutive cascades awards seven freespins, five provides 10 freespins, six gives you 15 freespins, seven gives 25 freespins, while eight or more provides 50 freespins.

Invaders from the Planet Moolah offers up a great and entertaining game, with the cascading symbols being a perfect addition to the product.