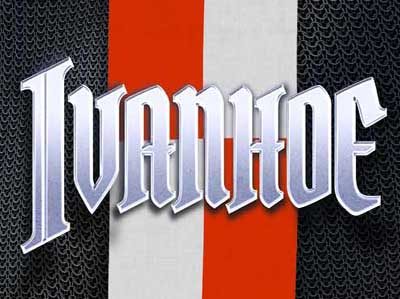 Ivanhoe is an online slot game by software developer Elk Studios. It focuses on a classic setup, but brings it to you neatly packaged in medieval parchment paper with a wax seal and the coat of arms of some self-proclaimed (or not) kingdom. The theme here takes you directly to a knight’s tournament, as you will be frequently reminded by the occasional neighing and nickering of horses. We have to say that the design here isn’t quite like what you’d expect to see from either a classic slot, or one that focuses on knights and medieval festivals. The backdrop is in black and white, showing two trumpeters and a cheering crowd in the distance. Yet slicing this spectacle right in the middle is a clearly digital screen declaring the two contestants. Oh and the year is 1194, in case you were wondering. 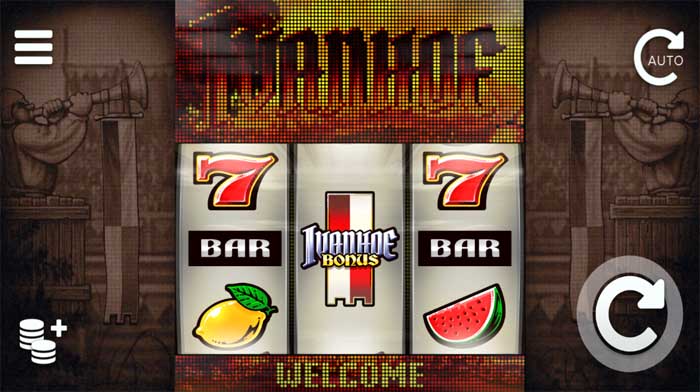 As for the symbols in this online slot game, most of them have no relevance whatsoever to the theme. That’s where the classic slot machine genre comes into play. First we traditionally have the lower value cherry symbols, and these can only award you a humble 80 coins. But from then on the value takes off, leading us to the other fruit icons. We have a pair of lemons on the reels here, following which are the watermelon icons. And this brings us to the BAR symbol – also very typical for this sort of games. Then there are the blue lucky 7’s. And finally we have the highest paying symbol on these reels – the red lucky 7’s. With its help you can pocket up to 3,000 coins! As for the layout here in Ivanhoe, it’s pretty simplistic and, in that, fairly typical for the genre. There are 3 reels and 3 rows, with an unusual number of 17 paylines. The paylines are fixed, though, so they’re not subject to adjustments. And the betting amounts here are rather steep, considering. You will be able to wager anything from 20p per single spin up to a total of £100 per spin. Players can count on an average long term RTP (Return to player) of about 96.3%.

You will notice in the game’s paytable that there isn’t a Wild symbol present alongside the rest of the icons. That’s because the base game in Ivanhoe doesn’t boast a Wild symbol at all. What you will be able to see on the reels during the base game, however, is the Bonus symbol. It comes in the shape of the game’s logo atop a banner and when it lands on a reel, it covers the whole reel. However, in order for you to benefit from it the most, you will be looking to land it on all three reels during the same spin. This will trigger this online slot game’s single special feature – the freespins bonus round.

As a result of this, players will receive a total of 5 freespins to begin with. But little did you know that this bonus game actually constitutes 5 whole separate levels with freespins. The first level, as mentioned, will award you 5 freespins. All throughout the freespins you will also benefit from a 2x multiplier on your wins. And your objective during this round will be to gain 25 times your total stake. Manage to do that – and you will level up, reaching the second round. It, in turn, will offer you an additional 3 freespins and a 3x multiplier. After you have reached the target amount there, you will move on to level 3 and so forth, until you reach the final level 5. 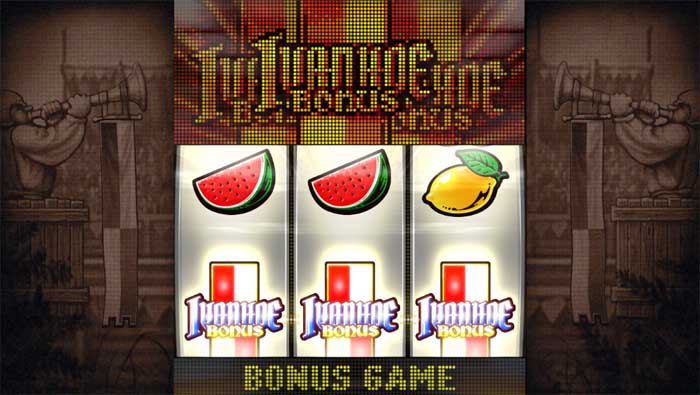 That last level is called Return of the King and will provide you with 3 freespins and a 6x multiplier. During this round you can potentially win the maximum amount of a whopping 3,000 times your total stake. And last but not least, all throughout this entire bonus round, and on all levels, you will also benefit from a Wild symbol. Representing it is a golden crown, and you can expect to see it anywhere on the reels. As is custom, it will be able to replace any of the other symbols on the reels, save only for the Bonus symbol. Note also that every time you land a Bonus symbol during the freepins, you will receive an extra freespin on top.

Ivanhoe is genuinely a very entertaining online slot game. Despite being in the retro genre, it still has a number of modern features that will be sure to please. Granted, there’s no Wild during the base game. But that’s well made up for later on. However, do keep in mind that this is after all a fairly volatile slot game, so triggering the actual bonus feature may prove to be a bit tricky. And progressing through the different levels can be trickier yet. So be sure to watch out for your bankroll.