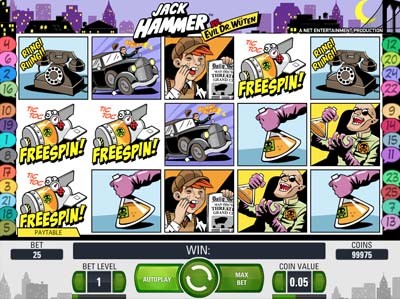 Jack Hammer presents you with a comic book style layout of its reels, which is backdropped by a dark night sky and cityscape. With this game, you’ll be able join Jack Hammer himself in the glorious industry of crime fighting, standing side by side with the private eye. Therefore, you’ll find reels that are filled with various different icons, including a man wielding a pistol, a blimp with a skull and crossbones on it, a newspaper boy, and a telephone in the midst of ringing, amongst others.

There’s a total of five reels included in the game, as well as three rows. A total of 25 pay lines have also been added to the game. Players can alter the coin value from its minimum of £0.01 up to its maximum of £1.00 per line, while the bet line can be changed from the lowest point of one up to its maximum of 10. This gives players the opportunity to place a maximum wager of £250 per spin.

Whenever a player scores a winning combination, or spins three or more freespins symbols, you’ll trigger the Sticky Win feature. The reels with winning symbols included in them are held in place while the others re-spin for a chance of bigger wins. The reels will continue to re-spin as long as there are new wins.

Wild symbols that are included in the game act as stand ins for all other icons, except for the freespin symbol.

This game offers up a beautifully animated product to play, and gives all players a strong selection of extras as well as an intriguing story line.