Jason and the Golden Fleece 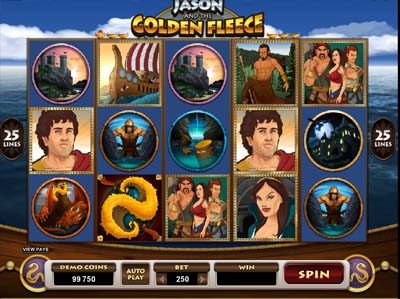 If you’re not already aware, Jason was an ancient Greek mythological hero. He was most famous for leading the Argonauts on their quest for the golden fleece. On the group’s journey towards the fleece, they went through many perils. The fleece itself was known as the fleece of the gold-hair winged ram, held in Colchis, which is today a part of Georgia. On the reels of the game you will find six lower paying symbols in the form of different locations. These are Iolcus, Mysia, Symplegades, Crete, Sirenum and Colchis. Five additional medium paying symbols are also available. These exist in the form of the Argo ship, the Argonauts, Chiron (a centaur), Medea and Jason himself.

It’s all available to play on a five reel and three row interface. A total of 25 different pay lines are also within the game and these are set in place. However, you do have the opportunity to alter your bet. The coin size can switch between £0.01 and £0.50. In addition, the amount of coins that you play per spin is changeable between one and 10. This allows a maximum overall wager of £250. An ‘Auto Play’ button is also available in the game.

You’ll find that this game incorporates one or two specialities into it. Firstly, there is a wild symbol, represented by the game’s own logo. Whenever this comes into view, it substitutes for all other symbols. The only exception to this is the scatter icon. This also multiplies wild wins by two.

As far as the scatter symbol goes, this is the icon of the golden fleece itself. These multiply your total stake by a specific amount. Five of them provide a potential maximum pay out of 25,000 coins. Should three or more come in to view, you’ll trigger Jason’s Journey. Each time this becomes active, you will see Jason’s ship travel along the map. Each location the Argonauts visit will provide you with a special feature.

There’s also a freespins round in the game. This becomes active when three, four or five wild icons appear in any location. A total of 10 freespins are provided with a three times multiplier. Freespins can also be re-triggered.

This one is definitely a favourite Microgaming game of ours. It not only offers up a great base theme, but it provides players with the chance to play through several different special round as well!