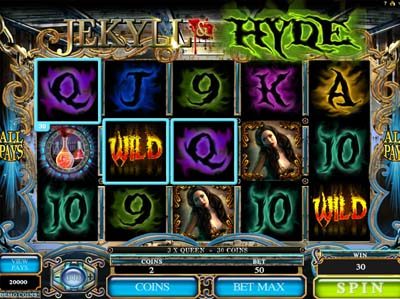 We all know the tale of Dr. Jekyll and Mr. Hyde, right? Well, they were, of course, one and the same person, with the good doctor transforming into the evil and cruel Mr. Hyde after taking a serum to try and mask the bad personality within him. This game from Genesis brings the whole story to life on your screen, presenting you with imagery which will relate back to the story. This includes icons of Jekyll himself, as well as two different icons relating to his scientific work – one with a bottle of poison on it and the other with an erupting glass bottle of potion. Another symbol shows a random female who appears to have stumbled onto the reels from a different story. These are all joined by the regular A, J, K, Q, 9 and 10 icons.

The developer has provided players of this game with five reels and three rows, while also including a total of 243 ways to win alongside. This isn’t able to be customised, although all players do have the chance to swap their bet amount per round. You’re able to do this by first of all altering the coin value, which changes between the minimum of £0.01 and the maximum of £0.10. Secondly, you can choose the amount of coins you wager per round as well, which starts from one and raises up to 10. This gives you the chance of placing a maximum overall wager of £250 per round.

The wild icon of this game is presented to you in the form of the word, ‘WILD’ in blazing orange lettering. This will stand in for any other icon on the reels, with the exception of scatter symbols, and when one or more wild substitutes in a win, the highest win is paid.

As far as scatter symbols go, these are represented by the game’s logo. These pay out in whichever position they show up in, with a maximum pay out of £1250 able to be won from them. If three or more scatters show up, you’ll trigger the ‘Mr. Hyde’ freespins feature. This sees you awarded with 10 freespins, and when triggered, any Dr. Jekyll icons will be transformed into Mr. Hyde symbols. These provide much higher pay outs, with five across the reels presenting a maximum reward of £7,500.

This game is definitely one of the better themed ones from Genesis. However, we can’t help but feel that they could have done something more with it, as it feels very lack lustre in terms of icons and standard game play.