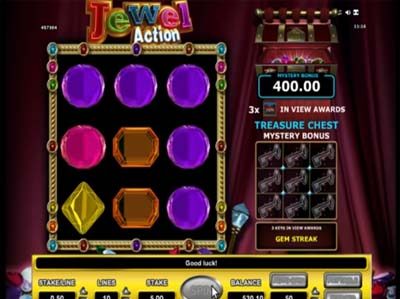 The theme of shiny gemstones and polished jewels isn’t all that uncommon and looks like game developer Novomatic has decided to show us its own take on the luxurious theme. The slot has a rather unusual packaging for a game by this manufacturer. It’s a bit more sophisticated, lacks the traditional Novomatic soundtrack and has burgundy velvet curtains as its backdrop. The reels have a nice gold frame around them and a handle with a large jewel. The symbols here are fairly simplistic, distinguishable by shape and color and they are all different jewels. Starting with purple, they move on to orange, red, blue, yellow, green and pink. Finally, the last two character symbols picture a queen and a king.

The setup is also rather simple, with only 3 reels and 3 rows. The total number of paylines is 10 and those aren’t subject to any adjustment. However, you will find that you can regulate your bet amount under stake per line. This leaves players with a stake range of 10p per spin up to a maximum of £500 per spin. As for the RTP, it’s a bit on the lower end at about 94%.

For being a rather straightforward-looking slot game, Jewel Action actually has a few special features up its sleeve. For one, it has a Wild symbol that can appear in any position on the reels. It can also substitute for any of the other symbols to help create winning combos. However, there are three more special symbols in this game and the Wild cannot substitute for them. 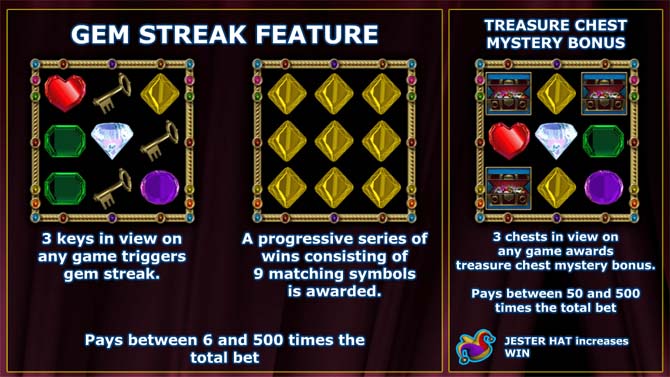 The first of them is the Key Scatter symbol, which can trigger the Gem Streak freespins feature. To activate the feature, you will need to land 3 Scatter Keys anywhere in sight during a spin. As a result, you will receive some random number of freespins, but the best part is that you will receive a reward for each of them. Furthermore, as long as you spin a winning combo, you will be guaranteed a new spin.

Next up is the Treasure Chest Mystery prize feature. During each spin you will see the Mystery Bonus amount to the right of the reels change to a random number of anywhere in between 50x and 500x your stake. Once you land 3 Treasure Chest Scatter symbols, you will receive the amount shown during that spin. And finally, there’s the Jester Hat symbol. If you happen to land it anywhere on the screen, it will clear it of all symbols. This will make room for other symbols to fall in their place and potentially award you a winning combo.

Jewel Action is not your typical Novomatic slot and it happened to be an instant hit when it was first released. And even though it’s been around for a few years now, it’s still pretty popular with players. This slot tends to award you more, the more winning combinations you land. This is due to the fact that winning combos disappear and make room for new symbols to fall in their place.