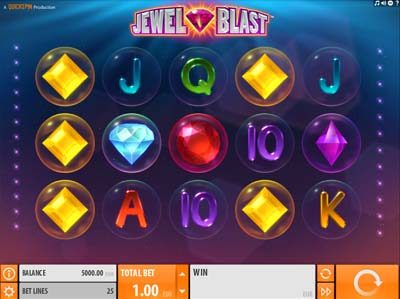 Jewel Blast features a variety of different coloured and shaped gemstones on its reels, all of which have many similarities to those that can be found in such games as Bejewelled. These are accompanied by standard slot game symbols, A, K, Q, J and 10. While there isn’t what could be called an ideal soundtrack to accompany such a themed game, the music included is significant enough with Jewel Blast.

The layout of Jewel Blast is five reels and three rows big, and it also contains a total of 25 paylines. The coin value is automatically changed by altering the total bet, and therefore it changes between £0.25 per line and £4.00 per line. This means that the maximum total bet able to be placed is £100 per spin. Autoplay allows up to 1000 consecutive spins to be played at the same wager level.

There’s a regular wild symbol included in gameplay, and this substitutes for all symbols on the reels, except the bonus icons, in order to craft winning combinations.

There’s also a bonus wild symbol, and two or more of these symbols appearing on the reels will trigger the Blast Bonus. During this sequence, all symbols that are adjacent to a bonus wild symbol will be blown away in a Blast Wave, creating more opportunities to win. New symbols drop into the spaces and the Blast Bonus round ends when no more Bonus Wilds are present on the reels.

Jewel Blast, while not being as thematically intriguing as some other games, does provide players with an amazing product to wager on, and also includes added special features that increase the excitement of the game. While the soundtrack may not be anything special, there is a mute feature that can take care of any negative feelings held about this.