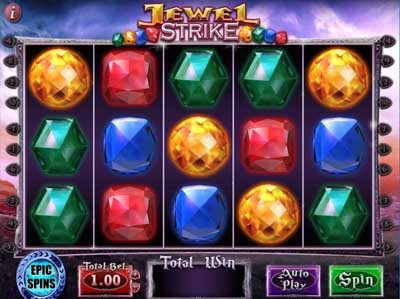 Jewel Strike is a colorful and shiny themed slot game by developer Blueprint Gaming, centering on the cold beauty of jewels. That’s more or less everything that you will be seeing on these reels. The gemstones are available in different shapes and colors, including the lower value playing card symbols, which are also in the form of jewels. They range from A to K, Q, J and 10. Following them are the four different colored gemstones: green, blue, red and yellow. The yellow one is the most lucrative on the reels, offering amazing payout of up to 500 times you stake. But there’s more to it than just that, as you will find out soon. In addition, the soundtrack is pretty decent, if you don’t count the sounds that accompany winning combinations. The backdrop also offers an interesting picture of a clouded sky above what appears to be a cliff.

The layout features 5 reels and 3 rows, with a total number of 10 paylines, which are not subject to adjustment. And with an average RTP of about 96.10%, players can enjoy a betting range of between 20p per spin and £500 per spin.

First of all, let’s note that gameplay here is a bit different than what most of us are used to. With that much in mind, you should be aware that there’s no Wild symbol to contribute to winning combos here. You also won’t find a Scatter symbol that would trigger freespins or pick-me games. 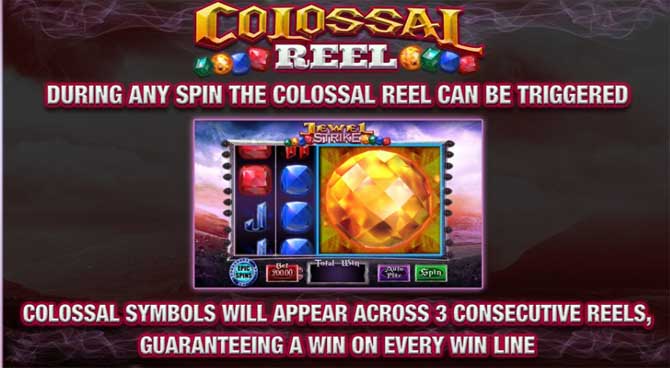 Instead, there is a Colossal Reel feature, which may prove surprisingly lucrative. Note that this is a random feature and can occur at any point in the game during any spin. And when it does, you will see the yellow jewel cover three adjacent reels, making for a guaranteed win on every line. And if regular icons of the same kind appear on the other reels – this will make for even bigger wins. 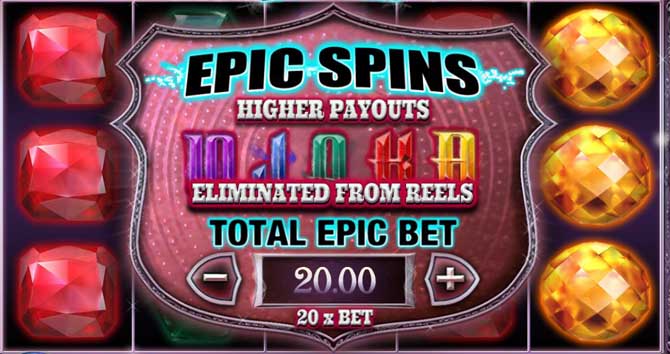 But that’s not all yet. You will notice a button just under the reels that says Epic Spins. You can press it at any point when you so choose to activate the Epic Spins feature. This feature will offer to remove certain lower value playing card symbols to automatically increase your chances for higher payouts. In exchange, you will be increasing your wager by a certain amount, depending on how many of the lower value symbols you would like to eliminate. The possible options include increasing you stake x5, which will remove 10, Jack and Queen from the reels. If you choose to increase it 10 times, King will also disappear. And, finally, if you decide to get rid of Ace as well, you will need to increase your stake x20.

Jewel Strike is a fairly minimalistic slot game with very simple (perhaps overly so) graphics. However, it does offer fun gameplay and can even make for some impressive payouts.