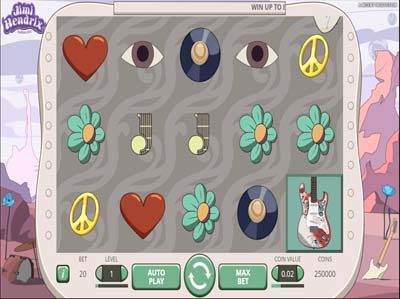 This online video slot from Netent brings all the wonder and awe of Jimi Hendrix to your computer screen. It’s almost as though the rock legend himself has been reborn. The Seattle, Washington born singer was one of the world’s most loved superstars during the 60s, and he is definitely reincarnated via this wonderful game. Of course, there has to be some of his music accompanying your game play, and the reels feature various different icons dedicated to the rocker and to the 60s era of peace. Therefore, you’ll find modified A, J, K, Q and 10 symbols, as well as a peace sign, a red heart, a vinyl record, a vibrant blue flower and an eye. These are also joined by an icon of Jimi himself, and two more of his guitars.

The game is played on a layout of five reels and three rows, and Netent have also included a set of 20 pay lines alongside. These have been fixed in position by the developer, but you can change the amount of the wager you place per spin. You can do this by altering the coin value between its minimum of £0.01 and its maximum of £1 per line, while the bet level can be switched between one and 10. This allows a maximum wager per spin of £200 to be placed.

The specials included in this game start with its wild symbol, and this is represented by the image of Mr Hendrix. As a wild, he substitutes for all other symbols on the reels in order to form a win, with the exception of scatters.

There’s also something known as the ‘Purple Haze’ feature, and this can be triggered when the icon of Jimi playing his guitar appears anywhere on reel one. This turns any A, J, K, Q or 10 icons into wilds for that spin only.

Another feature is the ‘Red Guitar Re-Spin’, which is triggered by the icon of the red guitar. Four or more of these landing in any location will see the reels re-spin once, and if more of these symbols show up during this, another re-spin is awarded.

A ‘Pick and Click’ addition can also be activated, and this is done when three scatter icons – represented by the vocalist in a white suit – show up on the reels. These appear only on reels three, four and five. There are four different prizes during the pick and click round, which are the coin win, the ‘Crosstown Traffic Freespins’, the ‘Purple Haze Freespins’ or the ‘Little Wing Freespins’. Each of these freespin rounds provide various different perks to the player.

Netent have once again outdone themselves with this one. We highly recommend playing the Jimi Hendrix video slot to all gamers!