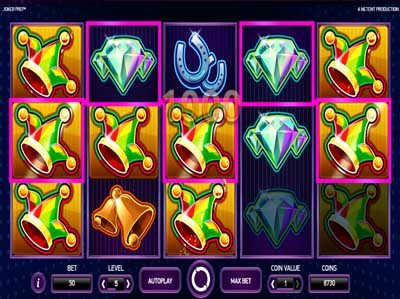 Joker Pro is a slot game by one of the world’s most renowned software providers – Netent. As one might expect from this developer, the design and graphics quality are very much up to standard. They’re also very simplistic, but in a classy and sleek way. The backdrop represents an animated kind of disco scene, with blinking lights and a matching upbeat soundtrack. And once you start spinning the reels, they come closer to you for a better look at the symbols. And speaking of symbols, they actually feature all the most traditional slot machine images, such as the four leaf clovers, the horseshoes and golden bells. In addition, you can also see the Bar and 7 symbols, following which is the diamond and highest paying symbol.

The setup here is also pretty simplistic, featuring a 5 reel and 3 row layout. There are 10 paylines in total, and they are not subject to adjustment. As far as stakes go, they can span from 10p per spin up to £100 per spin. The RTP is also pretty high, offering an average of about 96.8%.

Joker Pro focuses mainly on one special feature – the Joker Pro Respin. In order to activate it, you will be looking to land the Jester Hat Scatter symbol. In fact, you will need to land at least one of them during a spin for you to trigger the feature. Look out, though, because this symbol can only appear on the middle reels 2, 3 and 4. 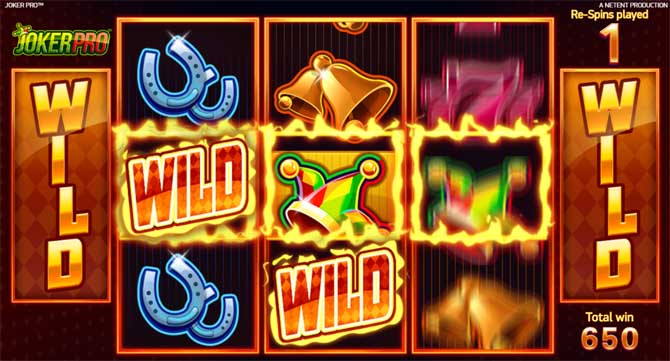 During the Joker Pro Respin feature, the first and last reels will turn completely Wild. In addition, the middle positions of the reels 2, 3 and 4 will become Hot Spot positions. And even that’s not all. The Scatter symbols that activated the feature will also turn into Wilds and will remain in place, as a respin occurs.

But let’s have a look at another important component to complete this bonus feature. The fiery Wild symbol in this game can only appear on the middle reels 2, 3 and 4. As any Wild should, it can replace any of the regular symbols to help form winning combinations. The only symbol it cannot replace, though, is the Jest Hat, which is the Scatter. You will especially want to look out for this symbol during the Joker Pro Respin feature. Any Wild that appears during the feature will trigger an additional respin. But more importantly, you will be aiming to land three Wild symbols in the Hot Spot positions. Doing so will reward you an amazing cash prize of 1,000 times your bet! This will essentially also end the feature, so don’t count on gaining further respins.

Joker Pro is a fun and enticing game. The graphics and sound quality also contribute the overall appeal of this game, as does its charming simplicity. Most of the action is of course concentrated in the bonus feature, but it’s fairly easy to trigger. If you are a fan of the old school you will love this one from NetEnt. The game play is really straight forward, but the bonus feature is great in all its simplicity. The fact that you can win 1000x in the feature makes it very exiting too. Joker Pro is a really well made slot machine and with a RTP of 96.80% and a top prize of 1000x, it is definitely worth a spin at one of our recommended casinos.