Journey of the Sun 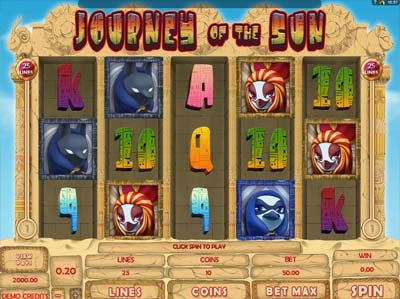 Journey of the Sun Slot Review

You’d never guess it from the title, but Journey of the Sun is actually another game based around Egypt. It’s set against a backdrop of figures carved into stone, and presents players with intriguing icons. While many games tend to take a more serious route towards fulfilling this theme, Genesis have gone for a bit more of a cartoon approach with this one, offering up animal versions of well-known figures. So, you’ll find what could be described as a magpie version of Cleopatra. Or there’s also a cat version of Isis. In addition, there’s a symbol of a Pharaoh in the form of a falcon. Rounding up these characters ias a rather creepy form of a half dog/half cat looking creature with white eyes. And these are all accompanied by the A, K, Q, J, 9 and T symbols.

The game itself is played on a five reel and three row layout, while 25 different pay lines have been added as well. You can customise these to suit your own personal preferences, as can the coin value and the amount of coins wagered per line. The coin value starts from a minimum of £0.01 and can be raised up to a maximum of £0.20 per line, while the amount of coins you’re able to wager per round is able to be switched between one and 10. This allows all players the possibility of betting a maximum of £50 per spin.

There’s a scatter icon included in this game, which is the same symbol as the logo. This will trigger the bonus feature, which is based on the ancient Egyptian board game known as Senet. You’ll need to get three or more scatters in order to activate it, and once you’ve done so, a second screen will appear, which will present you with a 3×10 Senet board. There’s a light piece, which represents freespins, and a dark piece for the freespins multiplier. You’ll first pick where to place the light piece (anywhere on the top row, or the last five spaces of the second row). Once you’ve done this, the piece will stop on a space and reveal the number of freespins you receive. This number will then determine how many spaces to move the dark piece, which will then give you your multiplier.

There’s also the ankh symbol involved in this product, which presents the games wild icon. This will substitute for all other icons on the reels, except for the scatters, in order to make a winning combination.

This game provides what can only be described as a pleasant surprise. It has a wonderful set of graphics, offers up some intriguing game play, and provides some great special features as well.