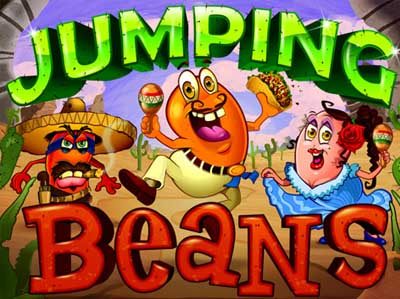 Jumping Beans is an online slot game by online slots developer Realtime Gaming. Pull out the guitars, maracas and get ready for some delicious tacos. This title focuses on a Mexican theme and it boasts a brilliant, fun design. The backdrop would suggest that it all takes place in the Mexican desert, with different cacti peering from behind the reels. You can also make out the clear blue sky above the sandy plains. As for the reels, they’re packed with stereotypical Mexican imagery, such as traditional foods and musical instruments. But more on that in just a little bit. The graphics in Jumping Beans are of good quality, too. However, the game does lack a soundtrack of its own. Note also that this is a very simplistic online slot game, which you will be able to guess already as soon as it loads. 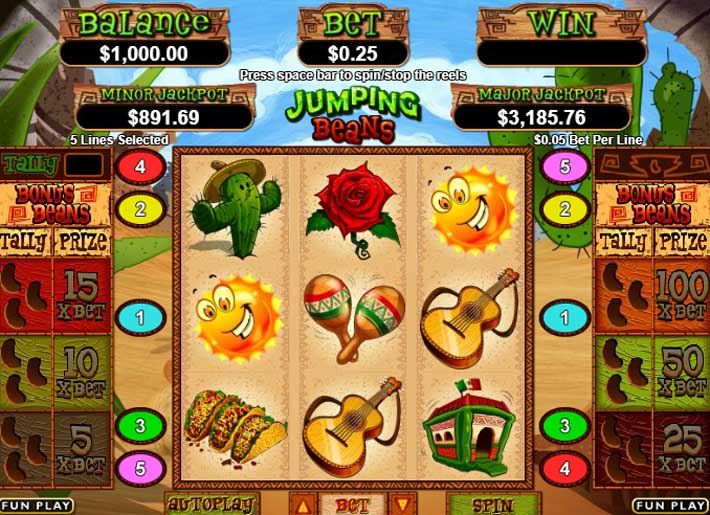 The symbols on the reels here are very charming. The lowest paying of them feature a red rose and a timid cactus wearing a sombrero. Next are the musical instruments we mentioned earlier, namely the guitar and the maracas. And after that we have tacos – lots of them. There’s a symbol with just a single taco, one with two and finally, a symbol depicting three mouthwatering tacos. Then after that we have the symbol of a sun, and that of a traditional-looking little house. Last but not least is a mean bandit bean with a cigar. Now as for the layout, you will have noticed by now that it’s pretty basic. The layout features a square grid of 3 reels and 3 rows, with a total of 5 paylines. Unlike with the majority of RTG offerings, the paylines here are fixed, so you won’t be able to regulate them. Stakes are still fairly agreeable here and start off at a minimum of 5c per single spin. The maximum amount you will be able to wager on these reels is $1.25 per spin. To form winning combinations you will need to line up 3 symbols of a kind on an active payline. With the three higher value icons, you can still pocket prizes for only 2 of a kind on a payline.

Besides the evil bean, there’s also a Mr. Bean symbol on these reels, who happens to be the complete opposite. The jolly Mr. Bean is also the game’s Wild symbol and absolute most lucrative icon in this game. It can potentially award you up to 1,000 coins. And on top of that, it will also be able to replace any of the other symbols and help complete winning combinations. Furthermore, Mr. Bean will also double the payouts for any winning combo it partakes in. However, there is one exception as to the symbols that the Wild will be able to substitute for. And that is the only other bean character symbol – Mrs. Bean.

Mrs. Bean acts as the game’s Scatter symbol, but she doesn’t offer any real payouts of her own. Instead, she will be able to trigger the Bonus Bean feature in this title. And in order for that to happen, you will need to land a total of 3 Scatter symbols anywhere on the reels. This will award you a total of 10 freespins. This is when the Bonus Beans Tally on either side of the reels comes into play. All throughout the freespins feature, you will collect any Mr. Bean, Mrs. Bean or Bandidos Bean symbols that appear on the screen. Depending on the number of Bean symbols you collect, you will receive an attractive cash prize at the end of the bonus feature. Potentially, you can gain up to 100 times your total stake.

Last but not least, let us also not forget the Auto Nudge feature. It can take place after you complete a spin and after the payouts for it have been awarded. The only condition is that there would be a Mr. Bean or Mrs. Bean symbol either above or below the reels. As a result, that reel will nudge up or down one position, so as the respective Bean symbol to come onto the screen. So you can potentially gain even more prizes or even trigger the bonus round.

Jumping Beans may at first look like a classic slot game. But really, it offers much more than just that. Yes, the layout is pretty basic, but you get to benefit from Wilds, Scatters and even two special features. It certainly also doesn’t hurt that there’s a very fun theme and good quality visuals. This is a medium variance title, so prizes are quite decent, with bigger rewards obviously coming from the freespins bonus. You can also trigger it at somewhat evenly spaced intervals, whereas the Auto Nudge feature is likely to occur more frequently.