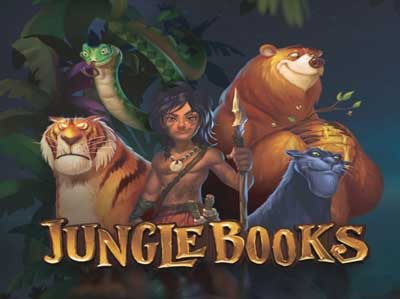 Jungle Books is an online slot game by software provider Yggdrasil Gaming. A number of other titles centering on this theme have been released by other developers, as well. But few of them come even close to matching Yggdrasil’s superb graphics and ability to create a one-of-a-kind atmosphere. Besides pleasing visually and having a cool soundtrack to go along with gameplay, Jungle Books also offers exciting new features and a different angle on gameplay. As for the setting here, the base game takes you to the depths of the jungle, where Mowgli will help you spin the reels. And then there are also other characters, who will each take you to their part of the jungle – or realm. The reels are a treat to look at themselves, too. They are transparent, so you can see behind them. But they have cool vine frames, sprouting the occasional flower here and there. 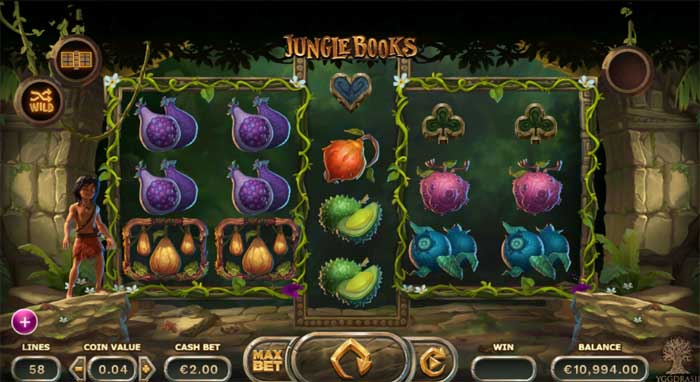 As for the symbols in this title, first we have the lower value playing card suits. These match the theme very nicely and include the symbols Diamonds, Clubs, Spades and Hearts. All offer equal payouts, so you won’t need to concern yourself with the paytable just yet. As for the higher value icons, these feature five exotic pieces of fruit. We’ll leave it to the experts to identify, but there’s a good chance some of these only exist in this online slot game. One of the higher paying icons is the one that looks like a couple of oversized blueberries. But you will really want to look out for the symbol picturing three golden colored fruits. This is the most lucrative icon, offering payouts of up to 300 coins. As far as the layout goes, it’s quite out of the ordinary. There are 5 reels, and the number of paylines ranges from 58 to 68, depending on the realm you play in. But more on that in just a little bit. The betting range is quite large, though, spanning from a minimum of 10p per spin and up to £100 per single spin. In addition, Jungle Books also has a fairly decent RTP of 96.1%.

Jungle Books boasts a Wild symbol, as well, which can appear in any position, anywhere on the reels. And while it doesn’t offer any payouts, it can replace any of the other symbols on the screen. And in doing so, it can create better winning opportunities and increase your chances for a higher win. But keep in mind that the Wild will not be able to substitute for any of the special symbols on these reels.

The main attraction of this slot game is the fact that it features five different realms – for each of the five characters. Each character, here called the Host, will have two features to award you so long as they are active. After that, they can step away at any point, making room for the next host to introduce you to their realm. Different characters can also randomly appear as guests and award you their features in somebody else’s realm. 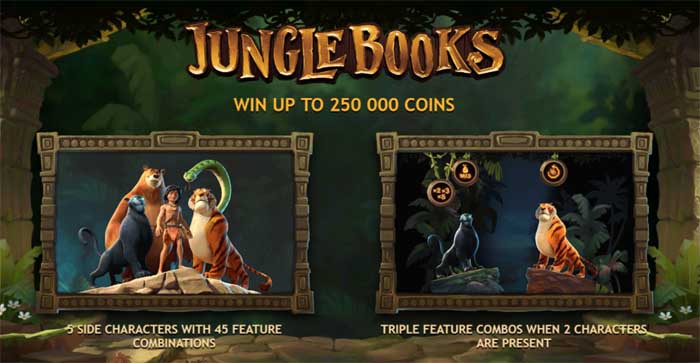 The characters here include Bagheera, who will turn the super high paying fruit into an additional Wild symbol. His second feature is a multiplier of 2x, 3x or 5x that is randomly applied to wins. Next up is Shere Khan – the tiger and the villain in the Jungle Book. However, here he’s rather friendly and offers a Sticky Respin every time you land a winning combination. During this respin, the symbols forming the winning combo (including Wilds) will remain on the reels, whereas all other symbols will respin. His second feature is Stacked Wilds.

Mowgli, on the other hand, can offer players Synced Reels, where adjacent reels of the same height will give you the same result. And he can also offer you spreading Wilds. In other words, 1 to 2 extra Wilds will randomly appear on the reels. Then Kaa the snake will offer Wins Both Ways (from left to right and from right to left). And his second feature is that Wild wins come with a 3x multiplier.

Last but not least, the fifth host is Baloo. His first feature will randomly determine one symbol to appear stacked on each spin. And the second feature is the Honeycomb Bonus. Every time you land a Honeycomb symbol you will receive a random cash bonus for it, which can be up to a whopping 50,000 coins. 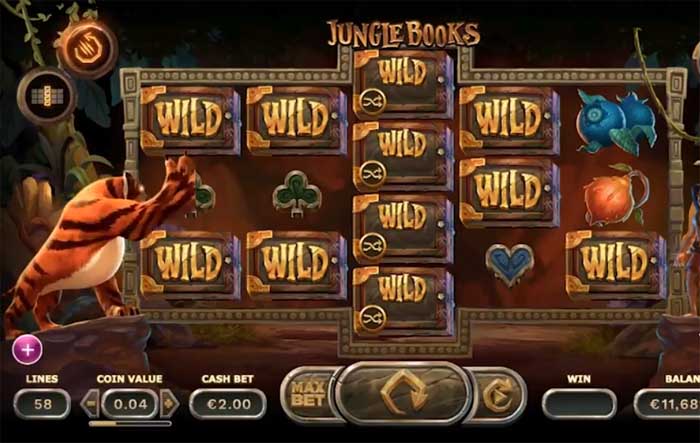 Jungle Books is certainly a very entertaining title that’s found a way to fully engage the theme in gameplay. The structure is unusual, but very fun and keeps you on edge all the time. The different realms have different features to offer, some more rewarding than others. And you will get to a change in them at somewhat evenly spaced intervals, so you can get a chance to explore them all. We’d put this slot in the medium variance range.