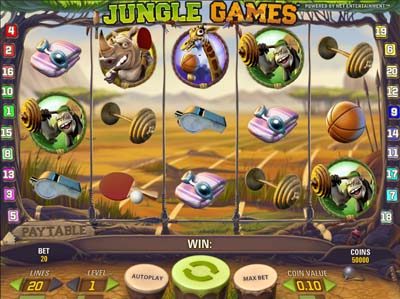 If you’ve ever wondered what it would be like to see animals playing a variety of sports, you need not look any further than the Jungle Games online video slot game from Netent. It will transport you directly to the plains of Africa, where you’ll find several different symbols on the reels relating to its quirky theme. These include a rhinoceros preparing himself for a round of table tennis, a giraffe clutching on to a basketball, a gorilla who is in the process of lifting weights, a hippopotamus with his towel and swimming goggles, and a lion who has donned his boxing gloves. Other icons are of the sports equipment in question.

As far as the general layout of the game goes, you’ll be presented with a five reel and three row interface, and Netent have also added a total of 20 separate pay lines into it as well. The lines can be customised at your own preference, as can the wager amount you’re able to place per round. This offers up a range of between £0.40 and £40 per spin across all 20 pay lines.

As far as the specialities of this game are concerned, there’s a wild icon in the shape of a golden trophy. Wilds will substitute for all other icons on the reels, with the exception of scatter symbols, and in doing so, they can form winning combinations. All wins including a wild icon will provide you with a double pay out.

The game’s scatter icon is presented in the form of a gold medal, and these pay out wherever they show up on the reels. Three or more of these will provide you with the ‘Pick Win’ feature. Here, you get to choose between freespins or a bonus win. Should you opt for the freespins round, you’ll need to pick one of the scatters to reveal the amount you’ve won. Freespin wins pay out a multiplier between times one and times five.