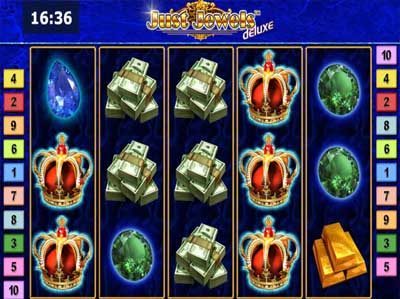 When it comes to jewels, gems and various other terms that you may have for precious stones, certain developers might have more of an affinity for them than others. It’s no secret that this is a common theme in the world of online gambling, however, Novomatic has already shown us their capacity of creating the perfect slot with this theme. Just Jewels Deluxe is yet another slot game of theirs that shares this theme. The only thing here is that there’s more to it than just jewels. They are the lower value symbols here and include purple, green, blue and red gemstones. Following them is a stack of cash, several bars of gold and a royal crown. And we’d have to hand it to the designers for coming up with that striking blue backdrop that provides such a great contrast for the symbols.

The setup is rather simple, featuring 5 reels and 3 rows, with a total of 10 paylines. Betting amounts range from a pleasantly low 10p per spin all the way up to a maximum of £100 per spin. The RTP here is pretty standard for slot games by this developer and is at the mark of 95.42%. What’s more, this game features Win Both Ways, which is a nice touch.

The most lucrative symbol on these reels is the crown, which you will probably be aiming most for. It offers payouts of up to 500 times your total stake, which is fairly rewarding. There’s only one special symbol on these reels, however, and no, it’s not a Wild. The Euro symbol represents the game’s Scatter and it can appear in any position anywhere on the reels. It can make winning combinations on its own, but in order for it to count for anything, you will need to land at least 3 Scatters during a spin. 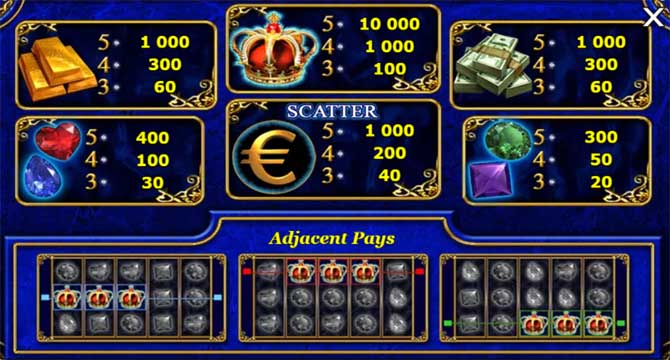 In addition, this game also has a Gamble feature, as many Novomatic slots tend to have. It offers a great way to add some diversity to gameplay and potentially multiply your wins. It’s available after any winning spin, all you have to do is select the Gamble option. It will provide you with a side game of double or nothing. The objective of the game would be to guess the correct color of the top playing card in the deck. The only options are red or black, so you will have a 50/50 chance of doubling your won amount. You can have several attempts at this game, depending on how much you entered with. Just remember that losing once will take away your winnings and also end the side game.

Just Jewels Deluxe isn’t perhaps the most entertaining of slot games out there, provided it doesn’t offer exciting bonus features. However, the graphics are decent and the Win Both Ways feature makes for pretty frequent payouts. So, if you’re into more simplistic slot games, you might want to give this one a spin.