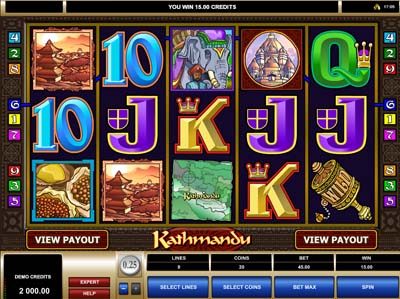 For those gamers who aren’t aware, Kathmandu is the capital and largest municipality of Nepal. It’s known as the gateway to tourism within Nepal and is the hub of the country’s economy. As such, you’ll find that this game from Microgaming presents you with all kinds of wonders. The icons that it holds start with the regular A, J, K, Q and 10 options. Joining these are four other icons – a map of the place, spices on offer at a market, an ornate elephant and a skyline view of the city.

The game’s layout offers up a total of five reels and three rows. It also includes a total of nine different pay lines. Players can customise these with the ‘Select Lines’ button in the first instance. You also have the option of changing your wager around as well. This starts from a minimum of £0.01 and increases up to £0.50. Meanwhile, a maximum amount of 20 coins can be in play per spin. This, in turn, allows a maximum overall wager of £90 per spin.

There are three different special features within this slot game. These start with its wild icon, which is a frankincense diffuser. As a wild, this stands in for all other icons on the reels, except for the scatter symbol. Five of them also provide a maximum pay out of 6,000 coins.

There’s also the scatter symbol that has been noted, which is the big bell icon. Scatter wins are added to pay line wins. Five of them will multiply the win by the total bet that you play. If you manage to spin three, four or five into view, you’ll receive a total of 15 freespins. This round also has up to a five times multiplier within and during this round, there’s an extra wild.

The extra wild is that of the temple, and like the standard wild it substitutes for all other icons on the reels. Again, the standard scatter is the only exception to this rule.

A gamble feature is also available, which becomes active after every win formed. You can choose to try and double or quadruple your win in this round.

You wouldn’t initially think that a game focusing on Kathmandu could be so good. But this Microgaming offering provides great graphics, interesting gameplay and, overall, a great theme.