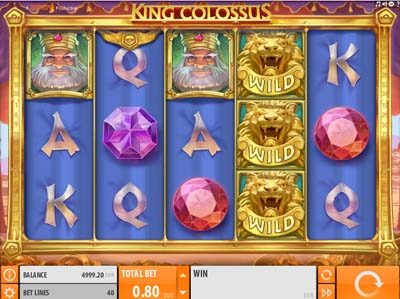 This game from Quickspin features reels filled with various different gemstones, one red, one green and one purple. These exist alongside standard symbols of A, K, Q, J and 10 as well as an icon of the King himself. You can also expect a very majestic soundtrack to be incorporated into gameplay with this one.

King Colossus has five reels and three rows worth of a layout, as well as 40 different paylines. These aren’t customisable, but you can switch the coin value between £0.01 and the very maximum of £3.00 per payline. This allows all players to place a maximum overall wager of £120 per spin. There’s also an autoplay button, which allows you to play up to 1000 consecutive spins of the reels at the same bet amount.

The game features a regular wild symbol, represented by a forward-facing lion, and these substitute for all symbols on the reels, except the freespins bonus scatter symbol and the +1 spin symbol.

There’s also a bonus wild symbol, which appears in the freespins bonus round. Two or more of these symbols appear in random positions on reels one and/or five each spin. Freespin wild symbols substitute for all symbols, except the +1 spin symbol.

Speaking of freespins, three bonus scatter symbols will trigger five freespins, and this will appear on reels two, three and four. The bonus symbol also has two extra features, the freespins wilds and the massive King features. Additional freespins can be won with the +1 spin symbol.

Finally, the symbol of the King transforms into a massive symbol in the freespins bonus round. The symbol covers 3×3 symbol positions on reels two, three and four.

King Colossus provides a nice slot game with fairly standard features when it comes to the main game. The addition of the freespins round, the two wilds and the large king symbol all make for exciting extra perks.