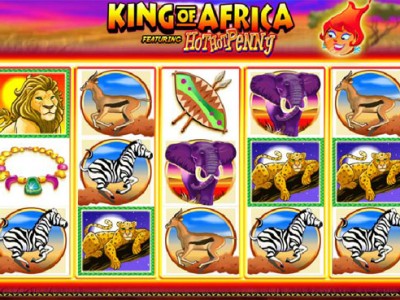 It’s a well-known fact that many of the world’s biggest and most popular animals live on the plains of Africa, and with King of Africa, you’ll get to travel to those very plains and experience the wonders of the natural world. Featuring reels filled with lions, elephants, leopards, zebras and various weapons and jewellery of native tribes, King of Africa is a spectacle to behold. The symbols are wonderfully animated, and a kettle drum-backed soundtrack plays along as you spin the reels.

The game itself features five reels and three rows, complete with a total of 20 separate paylines, all of which are fixed. Players are able to alter the coin value of the game between the minimum of £0.01 and the maximum of £5.00 per line, which allows a maximum overall wager of £150 to be placed across all 20 lines. This total includes a feature bet of £50.

The wild symbol of the game is its logo, and this will stand in for any other symbol on the reels, except for the feature symbol, in order to provide players with a winning combination.

The lion, also known as the king of the jungle, acts as the scatter feature symbol for this game. This provides a payout for two or more appearing anywhere on the reels. Furthermore, three or more of these will trigger the feature round, providing eight freespins of the reels. During each spin, one of the reels is completely wild.

The game also includes a Hot Hot Penny feature, meaning that three or more feature symbols appearing on the reels will also take you a pick screen before the freespins round. This screen consists of 25 tiles, and the number of feature symbols you managed to spin during the main game will represent how many of the tiles you’re able to choose. Coin awards or extra freespins will be awarded during this round.

King of Africa offers a welcome game to the huge plethora of slots available out there.