Kiss Shout It Out Loud 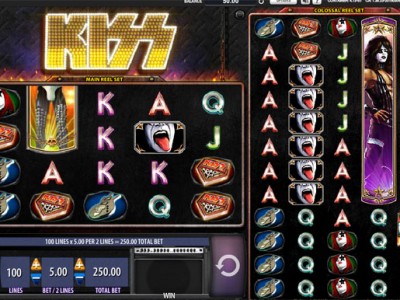 Kiss are arguably the biggest glam rock band in existence, so it seems only too fitting for the band to have a slot game created based on them. All the original band members are there – Paul Stanley, Gene Simmons, Ace Frehley and Peter Criss – decked out in their full stage attire and make up. In addition, every spin of the reels will be backed by a tune from the Kiss catalogue, creating an authentic game based on a popular rock band.

There are two sets of reels in this game, the first being three rows and five reels, while the second, also known as the colossal reel, is five reels and 12 rows large. The game allows all players to wager across the maximum of 100 paylines, or to alter this if you prefer wagering on less. Coin values can be changed between £0.01 and £5.00 per 2 paylines, therefore offering up a total overall maximum wager of £250 across all 100 paylines.

The symbol featuring all four Kiss members acts as this game’s wild icon, and will appear in stacked format on both the main and colossal reels as such. These will stand in for all other symbols to create winning combinations, except feature symbols.

Kiss – Shout It Out Loud is a great game, especially if you’re a fan of the band. The stacked wilds and extra features create a wonderful piece of gameplay.