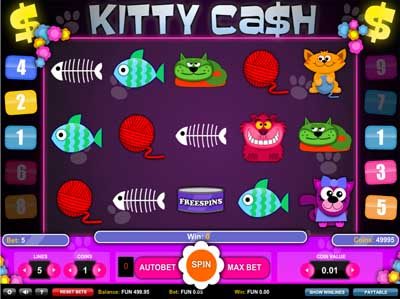 Kitty Cash is a cartoonish slot game by software manufacturer 1x2gaming. The main focus of the theme, as the title would suggest, is obviously different kitty cats. While most of them may not strike players as familiar, you will be sure to recognize at least one of them – the Cheshire cat from Disney’s Alice in Wonderland. Or at least it closely resembles that character. Other symbols include a goofy blue cat, a girly purple one and an orange kitten with a ball of yarn. Aside from them you will also see a serious male cat in a business suit, as well as green cat that seems very bored. In addition, there are also other cat-related icons, like a mouse, a fish skeleton, a whole fish and yarn. It also features a matching soundtrack that includes meowing and other cat sounds. 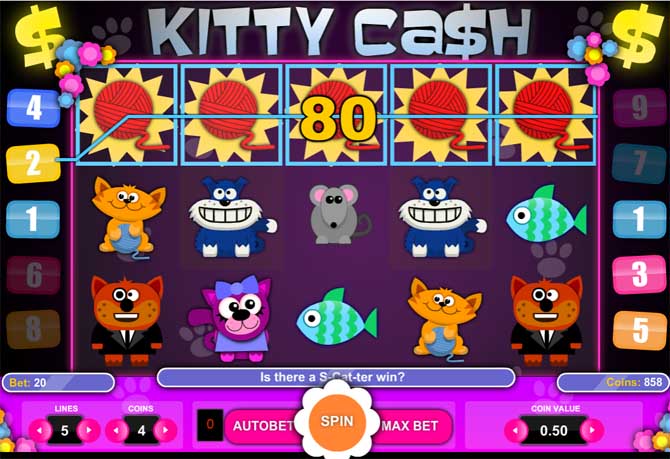 The layout in Kitty Cash is fairly common, featuring the regular 5 reels and 3 rows. There are 9 paylines here in total, but you are free to adjust their number if you so choose. The same is true for the number of coins you would like to wager, as well as the coin value. Stake amounts can range from as little as only 5p per spin and up to a maximum of £750 per spin. And the RTP is also refreshingly high – 97.86%.

The Wild symbol in Kitty Cash is also the game’s most stylish icon, as we’re sure you’ll agree. It pictures and elegant black cat, sitting against the full moon. The Wild will be able to replace any of the other symbols in order to help you create winning combos. What’s more, it will also provide you with a 2x multiplier on the payouts for combinations that it contributes to. However, the only symbol it will not be able to substitute for is the game’s Scatter. 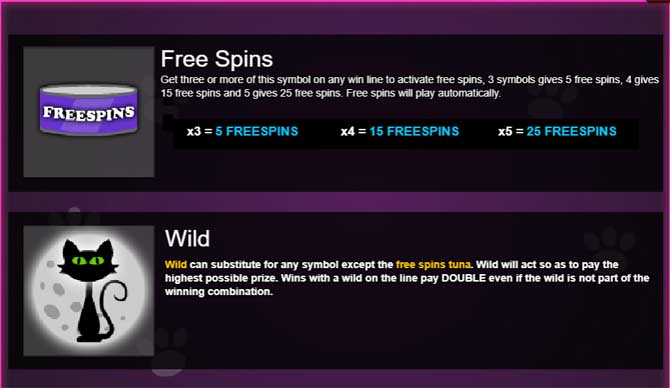 You will want to aim for the larger amount, though, as you will not have the opportunity to retrigger the freespins feature. You will still, however, be able to benefit from the Wild symbol and its multiplier.

Kitty Cash is a very basic, simple slot game with very smooth gameplay. The graphics may not be to everyone’s liking, as they may come across as rather childish at first. And don’t expect any immense wins here either. But with a very high RTP like this and regular win intervals, it’s certainly worth giving a spin.