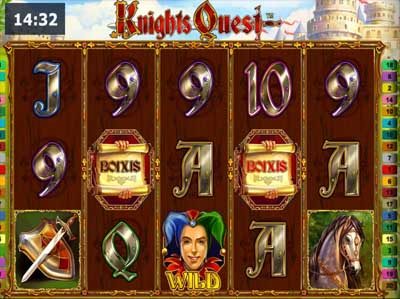 Knights Quest is a beautifully styled slot game by developer Novomatic. This game centers on medieval knights in shining armor, dragons, castles and damsels in distress. The graphics here are outstanding and unlike what you might be used to if you’ve played other games by this developer. The backdrop pictures a massive castle, hidden away behind the reels. As for the reels themselves, they appear to be out of wood. The symbols include the unique lower value playing card symbols A, K, Q, J, 10 and 9. Following them are all the higher value symbols, such as the shield and sword, and the faithful steed. Next is the golden haired princess and last but not least – the brilliant knight himself. He is the highest paying symbol on the reels and will offer you a total of up to 10,000 times your line bet!

The layout of this slot features 5 reels and 3 rows, with a total of 20 paylines. You can choose to play with less paylines, simply use the respective controls in the game settings. Betting amounts are pretty flexible starting at 20p per spin and going up to £50 per spin. This is a medium to high variance slot game with an RTP of 95.29%.

Knights Quest has special features a-plenty, which is also what sets it apart from other products of this manufacturer. The Jester in this game represents the Wild symbol, which it reminiscent of a few other Novomatic games. He can replace any of the regular symbols to help create winning sequences. But he also plays an important role in the several bonus features that this game has. 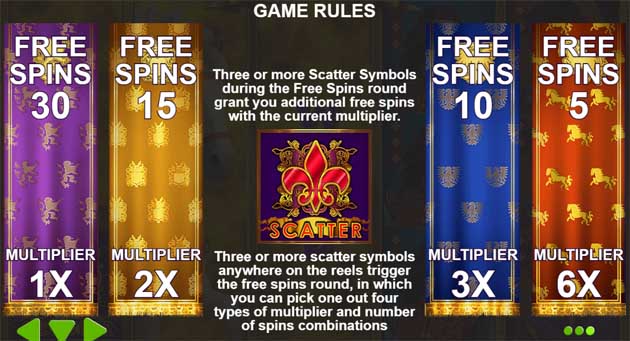 For example, there is the Feature Selection Bonus, which you can trigger by landing 3 Scroll bonus symbols. Once you have landed them, you will enter the bonus game selection, where you can choose from the three available options. The Free Games feature will award you 15 freespins, where the Wild can appear stacked. You won’t have the opportunity to retrigger the feature, however. 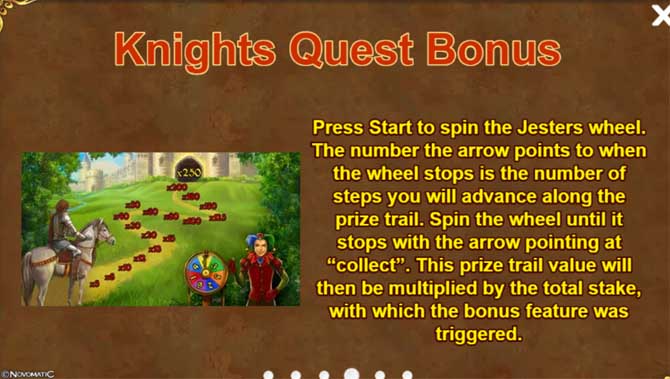 Alternatively, there’s the Knight’s Quest feature, which represents a cash trail. You can win prizes here of up to 250 times your stake. Last but not least, you can select the Juggling Jester feature. It will see the Jester come onto the screen and start juggling a set of balls. He will keep juggling them until he is only left with one, for which there will be a multiplier. The multiplier, in turn, can also be anywhere up to 250 times your total stake.

Watch out for the Dragon symbols, too. If you can land three of them on the reels, they will trigger the final bonus feature – the Pick and Win Bonus feature. It will result in a selection of different dragons from your to choose from and reveal your cash prize.

Knights Quest is a fun slot game and a real treat for the eye. In addition, the abundance of bonus features really makes this a rare gem among Novomatic slot games.