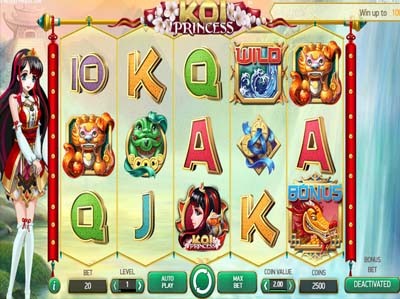 There are almost an infinite amount of developers out there who have decided to produce games that have a decidedly oriental theme to them. You don’t have to look so far to find them. However, Koi Princess, one of Netent’s more recent releases, works from a slightly new angle. Featuring a very manga-inspired character standing at the side of the reels, who would apparently be considered the title’s princess, this game also integrates icons with a very Asian theme to them, including balance pendants, dragons and lions. As would be expected, the game also has an apt soundtrack included as well.

Playing the game will allow gamers to take part in a five reel, three row product. There’s a set of 20 pay lines that have been incorporated into the game as well, while the coin value can be adjusted by the player from £0.01 up to £1.00 per line. There’s also the opportunity for players to alter the bet level from one up to 10, and when everything is maxed out, the largest bet that can be placed stands at £200 per round.

Koi Princess includes a ‘Bonus Bet’ feature, which you can activate for each spin. This doubles the wager placed, but in return it also increases the probability of winning the Bonus Feature and the Random Feature. It also changes the value of the Bonus Wheel feature and on sure coin wins for Sure Win Freespins feature.

Should three bonus symbols appear on reels one, three and five, they’ll award a bonus feature. This will awards one of four bonus features, those being Sure Win Freespins, Wild Reels Freespins, Coin Win and the Bonus Wheel.

Koi Princess is brimming over with added extras, and as well as the stellar graphics and game play, will give players a brilliant product to participate in.