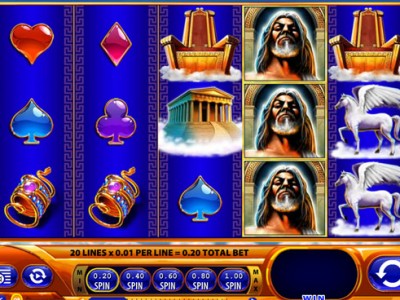 Kronos, or Cronus, is a part of Greek mythology, and he was the leader and youngest of the first generation of Titans, the divine descendants of Uranus, the sky, and Gaia, the earth. According to mythology, he was overthrown by his own son, Zeus and imprisoned in Tartarus. This slot game features symbols of Kronos himself, and various imagery from Greek mythology, including Pegasus, the flying horse, a temple and a throne.

Five reels and three rows make up the interface of this game, while 20 customisable paylines have also been incorporated. The coin value in the game can be switched from the minimum of £0.01 up to the maximum of £3.00, therefore allowing a maximum overall wager of £60 per spin. An autoplay feature has also been included, providing 200 consecutive spins of the reels at the same wager amount.

There’s a wild feature in the game, which is represented by an ornately decorated lion face. This acts as a wild symbol for all other symbols on the reels to create a winning combination, except the feature icon.

The feature symbol is the letter ‘K’ etched into a wooden shield. Three or more of these scattered icons appearing across the reels triggers the freespins mode, with three symbols providing 10 freespins, four providing 25 freespins and five awarding you with 100 freespins. Additional freespins can be won by spinning a further three or more scatter symbols during the freespins round.

While Greek mythology is a theme that has been overdone in slot machines, Kronos is a part of that theme that has never been worked on before. Although, while this is a unique part of the game, everything else included, from the wilds and the features, are fairly standard for such a product.