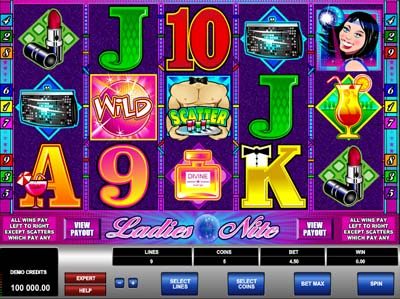 When ladies night is in full swing, you’re sure to know about it. With make up fully on, perfume spreading throughout the room, and more alcoholic beverages than you’d care to remember, it’s definitely time to party. And that’s exactly the idea that this game from Microgaming is trying to portray. Upon the reels, you’ll find various icons, the first of which are the adorned A, J, K, Q, 9 and 10 symbols, and these are joined by five other icons in the form of a tube of lipstick, a sequinned purse, a bottle of expensive perfume, a tropical cocktail, and a woman who appears to be having fun on the dance floor.

As far as the layout of the game is concerned, there’s an interface of five reels and three rows involved. The developer has also added a total of nine different pay lines, and these can be customised by using the ‘Select Lines’ button or by clicking on a number down either side of the reels. Further to this, you can also customise the amount of the bet you place per spin. There coin value is set at £1 per pay line, but you can change the amount of these that are played per line between one and five. This allows a maximum overall wager of £45 to be placed.

Playing this game will also open you up to various different special features, and this starts with the wild icon. This is represented by the disco ball and as a wild it will substitute for all other symbols on the reels in order to form a winning combination. The exception to this rule is the scatter icon, but any win incorporating the wild will also double your pay out.

The game’s scatter icon is represented by the topless waiter carrying a tray of shots. As a scatter, it will pay out wherever it shows up on the reels, with five of them multiplying your wager placed by times 500. Not only that, but when you spin three or more of these onto the reels, you’ll receive 15 freespins. All wins during this round will be tripled as well.

Ladies Night is one of the more intriguing slot games from this developer. It’s filled with high quality graphics and compelling game play, especially thanks to its special features.