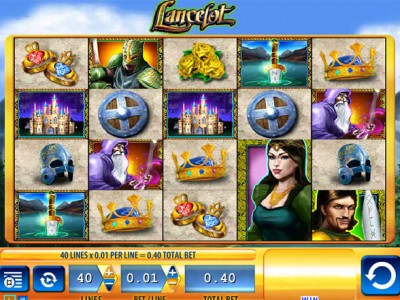 Those of you who are familiar with the tales of King Arthur and his knights of the round table will no doubt be fully aware of the character Lancelot. This game, by WMS, is based entirely around him, and features symbols such as those of the wizard, Merlin, Guinevere, the sword Excalibur, and Lancelot himself. All of these appear alongside such things as crowns, helmets, shields, knights and various forms of jewellery. For such a strong theme, there should ideally be a perfect soundtrack as well, although Lancelot doesn’t feature one during the main game.

The game interface offers up five reels and four rows, and a total of 40 paylines have also been incorporated. However, these aren’t fixed, so players have the choice of whether or not to play the full amount, or alter them down. The coin value can be switched between £0.01 and £5.00 per payline, so therefore, if a player is wagering on the full 40 lines, a maximum bet of £200 can be placed per spin.

Lancelot and Guinevere act as the games wilds, and are a little bit extra special, thanks to being stacked wilds. These will stand in for all other symbols across the reels in order to provide a winning combination.

The game has a freespins mode included as well, which is triggered when two or more scattered Lancelot and Guinevere wilds appear next to each other. If you spin two of these symbols, you’re provided with five freespins. Three will provide you with 10 freespins. Four offers up 20 freespins, while five will present you with a total of 50 freespins. All wins during the freespins round are doubled, and should you spin further stacked wilds of Guinevere and Lancelot, you’ll be presented with extra freespins.

This game could have included so much more into its gameplay, considering that the story of Lancelot is so well-known, and the fact that the soundtrack doesn’t actually kick in until the freespins mode is a bit disappointing, too.