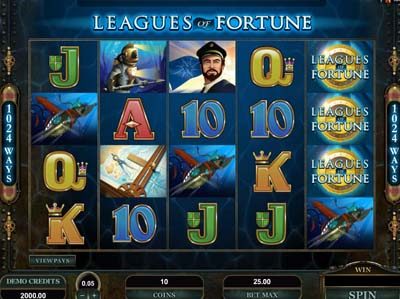 Microgaming’s League of Fortune will take you to the depths of the ocean floor. You’ll get to swim with the marine life, navigate your way around the seas and captain a ship. All of this in a single slot machine game! It provides a great theme to gamers as well as offering up some impressive graphics. The icons on the reels do begin with the regularly seen A, J, K, Q and 10 offerings. Joining them are four additional medium paying icons. These exist in the form of a map, a group of squids, a deep sea diver and a ship’s captain. There’s also the inclusion of an adventurous piece of music while you spin.

And speaking of spinning, the reels are five strong while the rows stand at four. This means it’s a slightly larger layout than is usually available. The game also features a total of 1024 different ways to win. This not something that is changeable. However, players do have the chance to adjust the wager that they place. This is done by altering the coin value between £0.01 and £0.10 firstly. Following on from that, you can change the amount of coins in play between one and 10. This allows a maximum overall wager of £50.

There are a couple of specialities within this game as well, starting with its own wild symbol. This is the icon of the game’s logo. As a wild it stands in for any other symbol on the reels, with the exception of the scatter icon. The wild appears as a stacked symbol in the both the base game and the freespins round.

And speaking of freespins, this round becomes active with the scatter icon. This is the sunken treasure chest symbol and you need to spin three, four or five into view to trigger the round. Beneath the sea is where the giant squid of fortune lives. This will bestow riches on all who cross its path. His golden tentacles will reveal multiple freespin awards. Furthermore, all wins during freespins will be multiplied by times five.

Finally, don’t forget about the gamble round. This is available after any win in the base game. This sees you spinning a needle to try and have it land in the blue ‘Win’ zone.

We’re definitely fans of this game. It’s got stellar graphics and gameplay as well as a wonderful freespins round. The theme is great and everything merges together to form a perfect Microgaming offering.