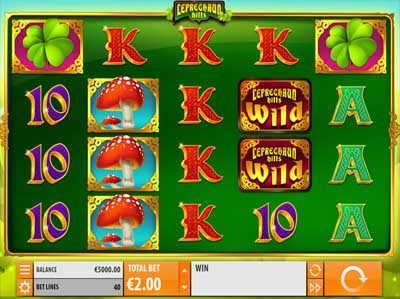 Leprechaun Hills is a vibrant, modern video slot by software provider Quickspin. The atmosphere it creates suggests a very peaceful and laid back gaming experience. But wait until you get close to triggering the bonus feature, that’s when the real enticement begins. Visually this slot game is everything an Irish luck theme would imply: you have an abundance of green both in the backdrop and the on the reels; there are Celtic ornaments, lucky charms and even a pint of some fine Irish stout. The soundtrack is also quite pleasant and changes, depending on where you’re at in the game. There are 10 different symbols in total, including the five lower value symbols from Ace to 10. The other five include the already mentioned lucky charms, the beer, mushrooms and the leprechaun himself.

The layout, however, is a bit different from most other contemporary video slots, featuring the customary 5 reels and 4 rows, instead of the usual 3. You will have 40 fixed paylines and a betting range of between 24p per spin and £80 per round. And you can count on an average RTP of about 96.49%.

Leprechaun Hills features its very own Wild symbol that you will find hard to miss. It’s in a deep red color with the word Wild across it in golden lettering. It can substitute for any one of the said regular symbols in order to contribute to winning combinations. However, it doesn’t really offer any value of its own and cannot replace the game’s Scatter. But it can appear in any position on the reels. 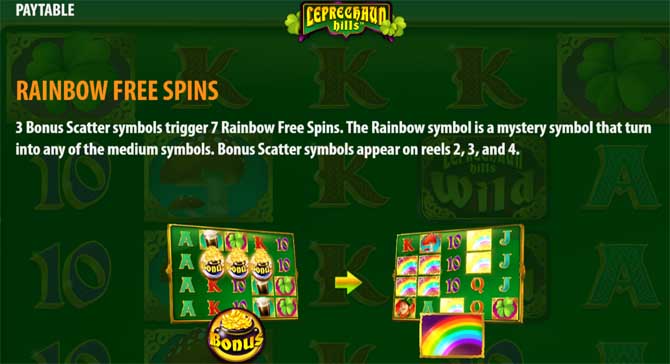 The main attraction here, though, is the Rainbow Freespins feature. In order to activate it, you will need to land 3 Bonus Scatter symbols that picture a black pot of gold. The Scatters can only appear on the middle reels 2, 3 and 4. As a result, you will get 7 freespins. During the freespins feature you might want to keep a lookout for the Rainbow symbol. It’s a mystery symbol, which can turn into any of the medium value symbols when it lands on the reels. Half of the time you can benefit from the best possible winning combination thanks to it. 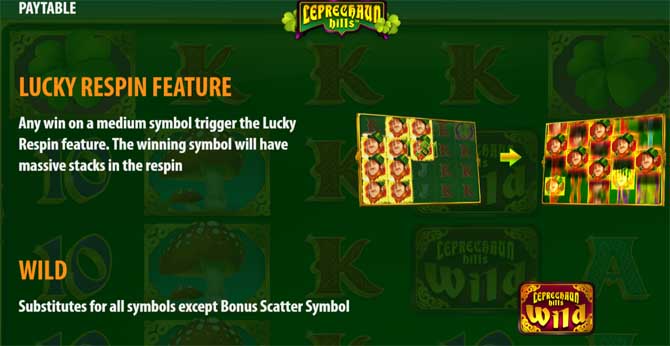 In addition, players can also benefit from the Lucky Respins feature. In order to activate it, you will need to land a winning combination with one of the medium value symbols. This can be the leprechaun, the lucky charms, the mushrooms or the stout. Once this happens, you will see stacks of that symbol start flooding the reels, triggering a respin.

Leprechaun Hills has much to offer, despite the rather overused theme. The graphics are great and the overall feel that the game achieves is also very nice. In addition, the high volatility of this slot game can ensure some pretty terrific payout. However, this is also reason for caution, as your bankroll can slip away just as easily.