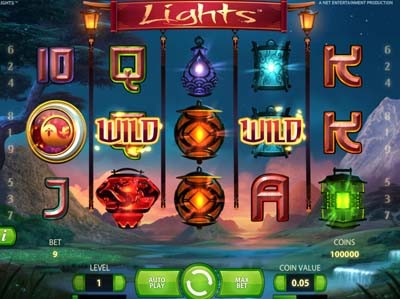 If you know that a game is going to be good just from viewing the opening five second video package, then you’re surely on to a winner, and that’s exactly what you’ll get with Lights. No sooner has it loaded up than you’re ears are treated to a wonderfully calming piece of music that continues playing throughout your spins. In addition to this, the reels will be filled with various different lanterns, which will slip into place alongside the A, J, K, Q and 10 icons.

The actual game itself is played on a five reel, three row interface, with a total of nine active, fixed paylines included. The game’s coin value is able to be changed by players from its minimum of £0.01 up to the maximum level of £1.00 per line. In addition, the integrated bet level is also changeable between one and 10. This allows a maximum overall wager of £90 to be placed per spin.

This game includes wild symbols, and during every spin, fireflies will swarm on to the reels and activate Floating Wilds. Between two and four of these appear randomly in every spin. Wild symbols, as in all games, substitute for all symbols, except scatters, to make a win.

Lights might just be the most calming slot game on the market at the moment, and the fact that it includes such interesting added extras makes it all the more compelling to play.