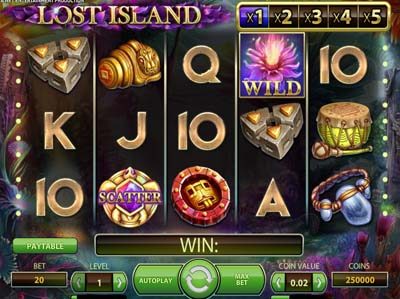 We’ve often heard tales of lost islands. They’re a frequent topic in fantasy books and television shows, and so it’s not a huge surprise to see that it’s also a theme that has crossed over to online video slots as well. Such is the case with the product entitled ‘Lost Island’ from Netent. It’s full of fantasy and mystery, and it’s been jam-packed with wonderful graphics and game play. Various different undiscovered treasures act as symbols on the reels, and these are accompanied by the standard A, J, K, Q and 10 icons.

These are all present on a layout of five reels and three rows, so it’s a fairly regular interface to game on. Netent have also included a total of 20 separate pay lines, none of which can be customised. However, all players do have the chance to change the amount of the wager they’re placing per round, and you’re able to select between total values of £0.20 and £100 per spin, simply by adjusting the coin value and bet level boxes around.

The additional features of this game start with its wild icon, and these can appear randomly anywhere on the reels in the main game and the freespins round. As a wild, they substitute for all other icons on the reels, except for scatters, in order to form a winning combination. The wild symbol is represented by the large blossoming flower. It has an extra perk to it as well, as when a wild symbol appears, it activates a multiplier. The total multiplier value is equal to the number of wilds appearing simultaneously, with a maximum multiplier of times five able to be triggered.

As far as the scatter icon is concerned, this is what activates the game’s freespins round. You’ll need to spin three or more of them in to view, with three scatters giving you 10 freespins, four offering up 20 freespins, and five rewarding you with 30 freespins. At the start of this round, a wild symbol will automatically appear in the centre position of reel three, and it remains there for the duration. Wilds can also appear stacked in this round as well.

Overall, this is one of the more overlooked Netent products, but it’s one of our favourites, mainly due to the fantasy theme involved within. Add the special features to this, and you’ve got yourself a nicely rounded game.