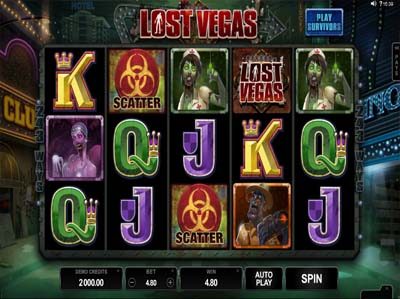 Lost Vegas is a zombie-themed video slot from Microgaming. What you’ll notice first when you start playing the game is a button on the upper right. This button toggles the game’s mode, which you can switch any time during the game, and it will change the backdrop. You can choose between the Survivor mode, featuring heroic individuals struggling to stay alive amid a zombie apocalypse, and the zombie mode, featuring the heroic zombies trying to eat the survivors’ brains.

All jokes aside, the game is quite entertaining, both from a film-goer’s and a punter’s point of view. It’s a 5-reel slot with 3 rows and 243 paylines. The least amount you can bet is 30p, while the most you may place per spin is ₤45. The RTP is between 95-96%, and the volatility is medium, medium to high, at best. Lost Vegas has an impressive winning potential, tempting you with the possibility of winning 2,155 times your stake on every spin.

As noted earlier, there are two modes to the game, the Survivor and Zombie, which differ not only in terms of aesthetics, but also the bonus rounds. Otherwise, both pay and play more or less the same. However, before we get to the differences, let’s see what things are the same.

Both modes feature the Lost Vegas logo as the wild symbol, and both have freespins and scatters to trigger them. The wild is pretty basic, it doesn’t do anything beyond standing in for any other symbol (except scatter).

Moreover, both feature the Blackout Bonus feature, which is randomly activated on any spin, provided it’s a non-winning one. What this does is scan the reels with high paying symbols, each of which is able to give you a random cash prize. There’s an added bonus to the bonus – should you manage to land a single scatter, anywhere on the reels, this will trigger the appropriate freespins feature (depending on whether you’re playing the Survivor or Zombie mode).

Then there’s the Zombie Fist of Cash feature, which also triggers randomly, and also on any non-winning spin. This one is as straightforward as it sounds – a zombie fist appears to award you a cash prize. Now that we’ve covered the shared, let’s see the different things. 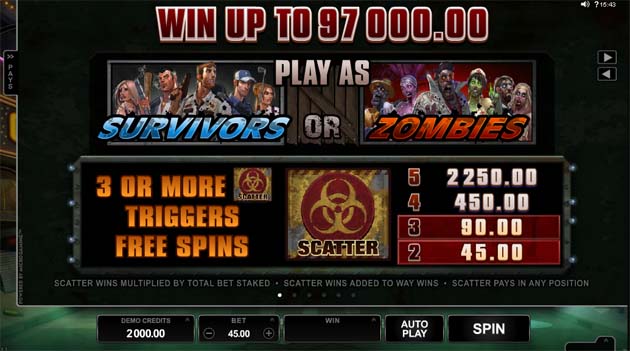 This game features the eponymous freespin feature which is triggered if you get three or more hazard scatters anywhere on the reels. Better yet, it comes with the Stash feature, which removes all the lower paying symbols from the reels and adds cash to your total payout tantamount to the value of the symbols removed. The prizes are accredited once the freespin feature is over.

During this part, you have, again, an eponymous freespin feature, also triggered if you land three or more hazard scatters. Here, you get the benefit of the Infection feature, and yes, it’s just as it sounds – the zombies will infect the reel they’re on, turning them into wild reels for the duration of the round. The feature ends once all the reels are infected, or you’ve played a total of freespins.

One neat (dubious as it sounds) thing about this mode is that, if you manage to get wilds to make a winning combo during, Elvis and other zombies will become animated.

It’s important to note that the Survivor mode is more stable, and you’ll probable have more luck playing that one; on the other hand, the Zombie mode is the one with higher variance, so it stands to reason that the winnings are also higher.