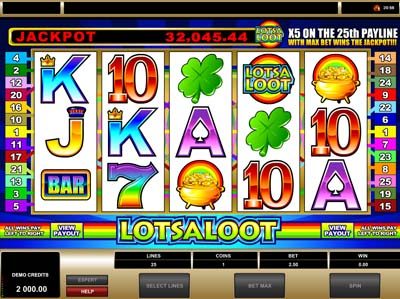 Microgaming has some of the best progressive jackpots on the internet today. Lotsaloot is just one of these in its five reel version. Presenting players with a plentiful array of colours, it provides a selection of symbols relating to good luck charms. However, the first of its icons are the often seen A, J, K, Q and 10 offerings. Alongside these, you will find additional symbols, including one of a four-leaf clover. There’s also a BAR icon on the reels, a number 7 and, finally a pot of gold filled with coins. You’ll also see the available progressive jackpot at the top of the reels.

A total of five reels and three rows are a part of this game’s layout. It’s also got a total of 25 different pay lines within. However, you can alter these, either with the ‘Select Lines’ button or by pressing on a number from either side of the reels. The coin value of the game is set at £0.10 though. This means that the overall wager is set at £2.50 across the 25 lines.

There are a couple of special features within this game as well. The first of these is its wild symbol, which is the game’s logo. As a wild, this stands in for any other icon on the reels in order to form a win. If five of them show up on a winning pay line, you’ll find that a maximum pay out of 10,000 coins will be won.

As far as the game’s progressive jackpot goes, this can be won with the wild icon as well. You need to spin five of the wilds onto the 25th bet line. Furthermore, you need to have the maximum bet value in play to receive this as well.

While there aren’t a huge amount of specialities in Lotsaloot, it does have its jackpot! This means that you could be on the receiving end of a huge pay out at some point. And, gameplay and graphics-wise, it’s a pleasant offering too.