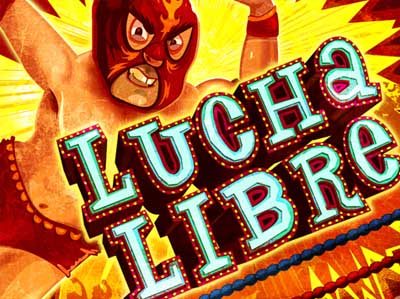 Lucha Libre is an online slot game by software provider RTG with a focus on Mexican wrestling. This title boasts superb graphics and a genuinely exciting theme and design. In the backdrop you can clearly make out a very large arena that is filled to the brims with a cheering audience. The reels are semi-transparent, so you can enjoy the view to the fullest. And right in the middle of it all is the wrestling ring where the action is about to start. There’s festive music playing to mark this very entertaining occasion, and confetti in the air. Every now and then there’s a random chicken popping out form the left corner of the screen to announce its presence. And all the controls and buttons below the reels represent the different wrestlers with colorful masks hiding their faces. But the genuine fun is on the reels themselves. 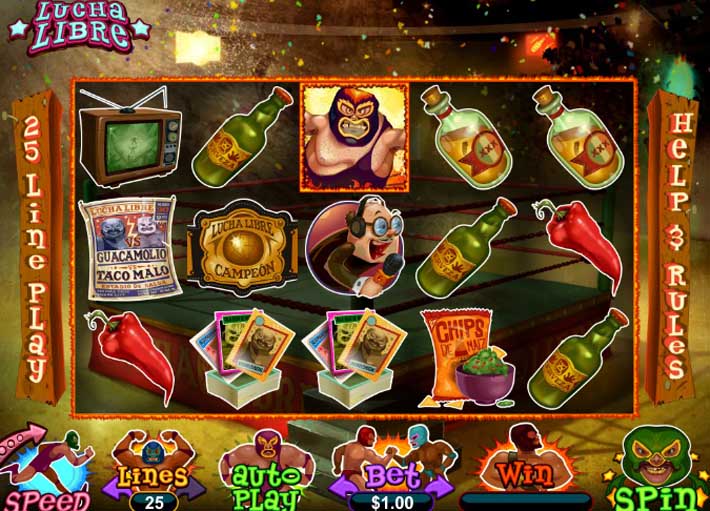 First in the line of symbols are the lower value icons depicting a bottle of beer and a red chili pepper. After that we have a large bag of nachos and a heaping bowl of delicious guacamole. In the same value category we also have a symbol depicting playing cards with all the wrestlers. Moving up with the value and, apparently, potency too is the bottle of tequila. And with it, there’s also a TV set with the wrestling match shown on it. Next we have a poster announcing the wrestling match, following which are a gold trophy and the champion’s belt. Last but not least is the commentator, who can barely remain in his seat. As for the layout in Lucha Libre, it’s no different from most other online slots out there. There are five reels and 3 rows, with a total of 25 active paylines. These paylines are not fixed, so you can regulate them as you see fit. There’s also certain flexibility in the game’s betting range, which you can control with the help of the two wrestlers below the reels. Wager amounts here span from a minimum of 1c per spin and up to a total of $6.25 per single spin.

Lucha Libre has an array of special features to offer players. And with them there are also not one, but two whole Wild symbols. Both come in the shape of a wrestler, one of whose name is Taco Malo. And the other tough guy goes by the alias of Guacomolio. They can only appear on the middle reel 3 in the base game, though. And when they do, they will contribute to winning combinations by replacing other symbols on these reels. Furthermore, if they happen to cover the whole reel when they land, they can jump onto another reel or even several other reels. Alternatively, they will just double the prizes they have contributed to. 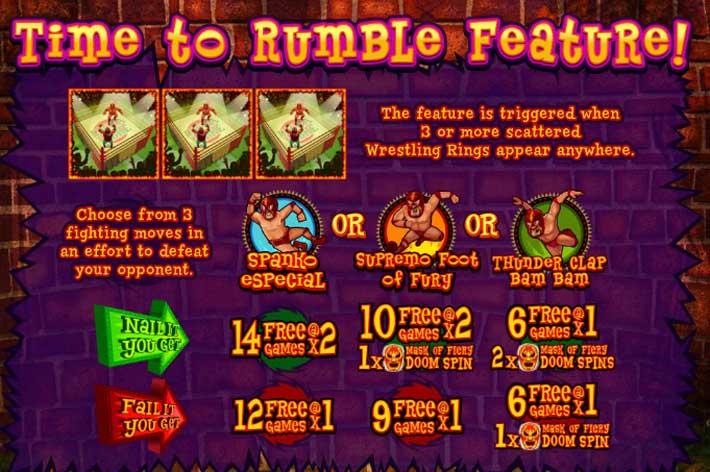 In addition, the Wilds will be able to substitute for all icons, except only for the game’s Scatters. And speaking of those, there are also two Scatter symbols on these reels. One comes in the form of a Wrestling Ring and is the more lucrative of the two. And the other depicts a Wrestling Mask. The Wrestling Ring Scatter will be able to trigger the game’s TTR feature. But for this happen, you will need to land at least 3 Scatters during the same spin. After this, you will need to choose one of three fighting moves in order to beat your opponent. 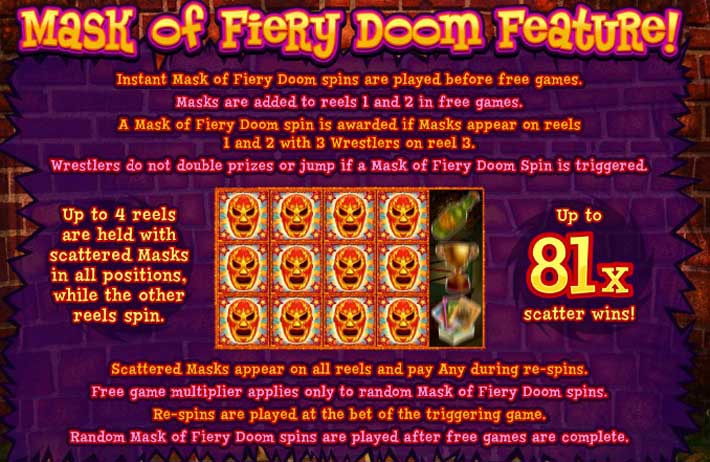 Finally, the Mask of Fiery Doom feature will see Mask Scatters one reels one and two. As a result, this will trigger a respin where all the Scatters will remain in place, while the rest of the reels spin.

Lucha Libre offers a whole bunch of entertainment for any player. Both the visuals and the game’s setup contribute to an overall exciting atmosphere and rewarding gaming experience. This is also a great offering for new players, as the variance is in the low to medium range. Therefore, you will also get to trigger the special features fairly often. And you will also get to benefit from frequent, yet small wins all throughout gameplay, especially in the base game. But we are sure that seasoned players will have just as much fun with this title.