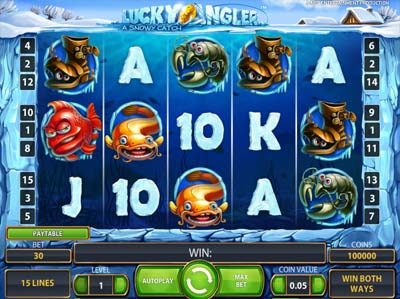 We have to admit that angling is particularly our favourite choice of pastime, but we do enjoy playing the Netent slot game entitled, Lucky Angler. It gives you all the wonderful fishing opportunities without the need to go and sit for hours on end at a riverside. Because of this, you’ll be presented with an interface which offers up icons of various different marine life, including a lobster, a happy and smiling orange eel, and even an old boot! The game appears to be set somewhere in one of the Poles as well, as ice and snow seem to have covered the top of the water.

A layout of five reels and three rows is clearly visible to play on, and Netent have also included a total of 15 different pay lines alongside. The bet lines cannot be adjusted in any way, so you’ll always be betting on 15 of them. You do have the option to change the amount of the wager you place per spin though, as this is done in the first instance by altering the coin value between £0.01 and £0.50 per line. Then, if you push the bet level up from one to its maximum amount of 10, you’ll provide yourself with the chance to put a maximum overall wager of £150 down on every spin.

The games special features are actually quite intriguing, and these begin with the symbol in the shape of a golden fish hook. This is the game’s sticky wild icon, and its first job is to substitute for any other icon on the reels, except for scatters, in order to form a winning combination. In the main game, these can only appear on reels two and four, while the freespins round allows them to show up on reels two, three and four. Should it complete a win, the sticky wild will remain in place and the reels will spin again. Should the same thing happen, the process continues until no further wins with the sticky wild symbol are created.

As far as the scatter icon is concerned, this is represented by a group of fish all swimming together, and three or more of these showing up at any time and in any place will activate the freespins round. Three of them will give you 10 freespins, four of them offer up 15 freespins, and five reward you with 20 freespins in total.

Lucky Angler is one of the more lost games from Netent, as many others have since been released with stronger graphics and specialities. However, we still think it’s a pretty nice product to play on the whole, and still maintains a welcome position in the developer’s catalogue.