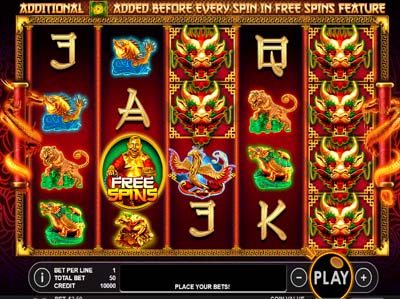 Lucky Dragons is a Pragmatic Play slot game that center on – you guessed it – lucky dragons! In fact, they’re Chinese dragons. The whole game has a Chinese theme, as you will find the reels are situated in between two red Chinese-styled columns with a golden dragon wrapped around each of them. Asian themes are nothing new in this industry of online casino slots. Much on the contrary, you could even say it’s more of a cliché, but the high quality of the graphics in this slot makes up for that. The background on the reels is a rich, deep red that sets a great contrast for the flamboyant, shiny symbols. And speaking of them, you will see golden statues of tigers, dragons, fish, birds and frogs. The lower value playing card symbols are also present: A, K, Q and J.

Lucky Dragons features a rather traditional for this game developer layout of 5 reels and 4 rows. Also another common trait of Pragmatic Play games, it has 50 paylines. Betting amounts range from 50p per spin and can reach up to £250 per spin. The default RTP, as per the manufacturer, is 95.19%.

The game’s Wild symbol is a Chinese gold coin. It can appear anywhere on the reels and will replace all of the symbols, with the exception of the Scatter. As for the Scatter itself, you will really want to watch out for it. It is in the shape of a golden Buddha statue and appears only on reels 2, 3 and 4. You will want to land 3 Scatter symbols at the same to activate this game’s bonus feature.

If you do indeed trigger the feature, you will receive 6 freespins, as well as a 2x multiplier on your total bet. The bonus games will occur on a different set of reels and some extra special features will be in order. Before each of the 6 freespins, a Wild symbol will appear on the middle reels 2, 3 and 4. In addition, these Wilds have a Sticky quality to them, so they will remain in place throughout the duration of the whole feature. This can make for some really lucrative winning opportunities.

And what’s more, you also have the possibility of adding more freespins to the amount you already have. Thus, every time you land a Scatter symbol during the freespins feature, you will receive an extra freespin on top. And if you can land 3 Scatters at the same time, you will gain another 6 freespins!

Though Lucky Dragons doesn’t offer a whole variety of different bonus features, the existing one does tend to make up for that. You have the potential of gaining a solid amount of freespins and with them attractive prizes. The graphics are also very decent, despite the theme being rather overused.