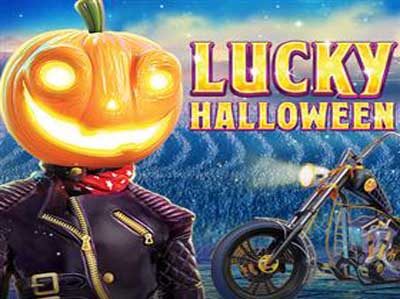 Lucky Halloween is an online slot game by Red Tiger Gaming. As you can tell from the title, the theme here is the spooky holiday of Halloween. But there’s really not much spookiness going on here. Instead, the design and the general feel here are actually pretty cute. There’s a pumpkin tree in the backdrop, growing jack-o-lanterns, with more of them overlooking the reels. And you can also make out the shape of a haunted castle somewhere far in the distance. This slot has an abundance of special features, but also plenty of different symbols too. First are the lower value playing cards A, K, Q, J and 10. Following them, is a bat cupcake, a magic potion, a mummy black cat, a witch’s hat and a motor bike with the game’s logo. That last one is also the highest value of the regular symbols. 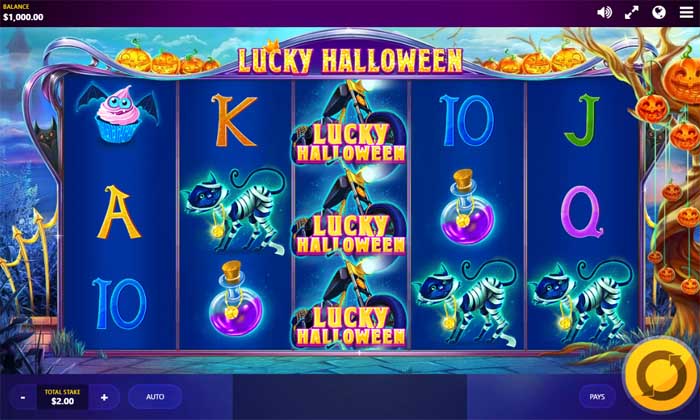 The layout in Lucky Halloween features the common grid of 5 reels and 3 rows. In addition, there are 20 fixed paylines. This means that you will not have the ability to adjust their number. However, that doesn’t go for the betting value. On these reels you can wager anything from 20p per single spin up to the limit of £500 per spin. As for the average RTP, you can count on about 95%.

The jack-o-lantern with the wide open mouth is the game’s Wild symbol. It’s also the highest value symbol on these reels, offering payouts of up to 400 times your stake. What’s more, the Wild can also appear in any position on the reels and also in stacks. And last but not least, you can expect it to replace any of the regular symbols to help create winning combos. The only two symbols it will not be able to substitute for are the two Bonus symbols. 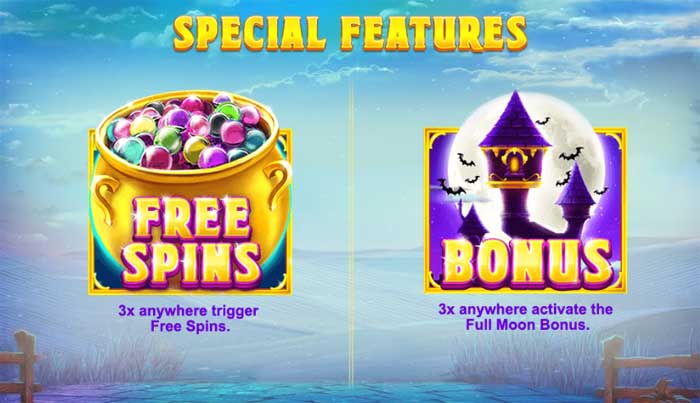 One of those Bonus symbols is the gold pot full of candy. It will be responsible for triggering the freespins bonus feature. And to do that, you will need to land at least three of these anywhere on the reels. After that, you will get to play a brief pick-me game to reveal the number of freespins you will be awarded. The second Bonus symbol, picturing the haunted castle, will trigger the Full Moon Bonus feature. It will offer you a cash trail with the possibility of landing up to 800 times your stake.

In addition, the game also features an interesting character – the Pumpkin Biker. He can award you any of the game’s four random features. One of them, for example is the Mega Wild feature, where a colossal Wild will appear on the reels, securing wins for you. Or another is the Pumpkin Tree feature, which can grant you a multiplier of up to 20x.

Lucky Halloween is a fun online slot game with numerous winning opportunities. Of course, the largest of them are in the bonus rounds, but those will be tough to trigger. So watch out for your bankroll!